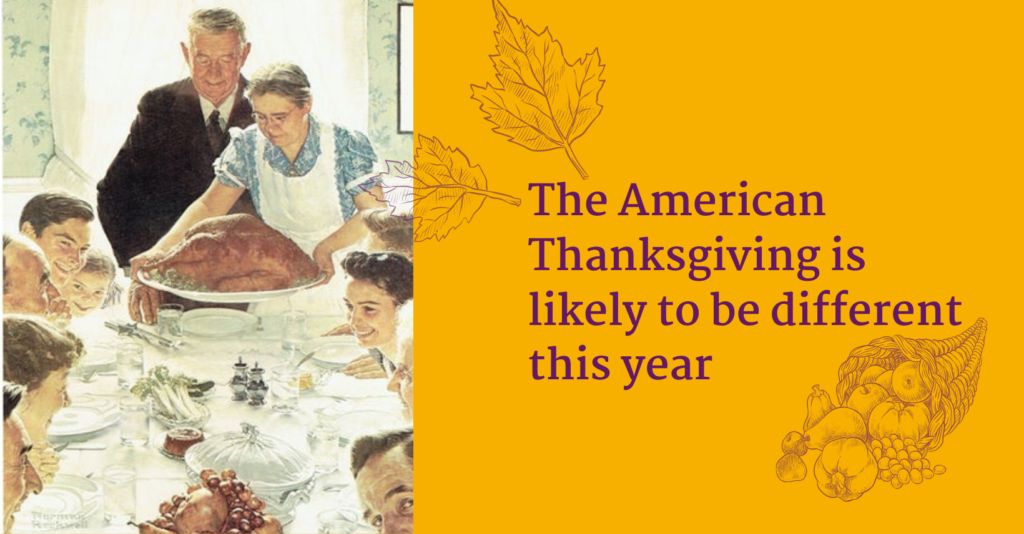 The American Thanksgiving is likely to be different this year

by Phil Burgess, Unabridged from the Life section of the Annapolis Capital, Sunday November 22, 2020

Michael Lindell is a friend of mine.  I’m not talking about Minnesota’s Michael Lindell who is seen daily on TV promoting “My Pillow” – the one with the Giza cotton.

I’m talking about Michael Lindell, the Australian cartoonist, the one who signs his work “Mikko”.

During the nearly four years I lived in Australia (2005-08), Lindell would sometimes make me the subject of his cartoons.  They were always insightful and humorous – though not always flattering.  After all, a keen insight and a flair for humor are in the job description of a cartoonist; a knack for flattery is not.

Still, I loved the guy, his talent, and his ability to see the essence of an issue, communicate it to others and make them smile even before their first cup of coffee.  After all, that’s what cartoonists do, and he did it well.

Lindell and I have stayed in touch over the years since I returned from Australia, and just last week, he sent me a cartoon of Rudolf, the Red-Nosed Reindeer – with a bright red mask on this snout.

When I opened his email, I wondered, “Why is Mikko jumping the gun on Christmas?  After all, we have a lot going on between now and Christmas – not the least Thanksgiving and Black Friday.”

As quickly as I wondered, I also remembered: Unlike the US, Australia does not celebrate a Thanksgiving. Though many countries celebrate an autumn festival or the annual harvest, only a few – the US, Canada, some Caribbean island nations, and Liberia – have a formal Thanksgiving holiday.

So, for a guy like Lindell, mid-November is a natural time to begin thinking about Christmas.

But for Americans we are now focused on what many have called the “most American” of holidays.

Indeed, our first Thanksgiving was celebrated in 1621, when the Mayflower Pilgrims were joined by Wampanoag Native Americans to celebrate a successful autumn harvest at the Plymouth Plantation after the settlers first year in what they called the New World.

However, more than 150 years would pass before the first formal Thanksgiving was proclaimed by George Washington in 1789 – and it was not until October 3, 1863 that Thanksgiving was formally established as a national holiday by Abraham Lincoln.  The current date didn’t come until 1941, when Congress named the fourth Thursday in November as our national day of thanks.

Having lived for extended periods in Europe and Australia, it is my experience that non-Americans are notably fascinated by the American celebration of Thanksgiving. In fact, the late, respected journalist and one-time White House Press Secretary, Tony Snow, reflected this view when he said, “If you think Independence Day is America’s defining holiday, think again. Thanksgiving deserves that title, hands-down.”

Thanksgiving is special for those in their bonus years because it’s normally an inter-generational, family-centered time to tell stories, unpack family traditions, and enjoy a feast – in our home that would be turkey, stuffing, cranberries, candied sweet potatoes with marshmallows on top, buttery mashed potatoes, giblet gravy, green bean casserole, topped off with apple pie and/or chocolate cake and ice cream.

This year, however, will be different as many extended families will forgo traditional get-togethers because of the COVID-19 threat. Some are concerned they will be spreaders and others fear they will be receivers – and some simply choose to comply with those public health officials and agencies who are recommending Thanksgiving-in-place, using a telephone or Zoom call to engage extended family and friends who would otherwise be together in normal times.

However, without the joy of large family gatherings – usually accompanied by busyness and revelry –  there may be a silver lining.  Indeed, 2020 may be a good year to devote Thanksgiving to, well, giving thanks.

Thanksgiving 2020 may be a good year for thinking about and identifying our endless blessings – not the least to be living in the US but also to include the little pleasures, such as a warm blanket, the smell of baking bread or a call from an adult child or a grandchild.

Thanksgiving 2020 may be a good year for expressing gratitude, which, according to Cicero, “is not only the greatest of virtues but the parent of all others”.

Cicero’s view was also echoed by the Spanish Saint, Ignatius of Loyola, founder of the Jesuits in the 16th century, who saw gratitude as foundational to everything in our lives – including big things, such as faith, family, friends, relationships – those you love and those who love you; and the small things, such as talent and treasure, the food you eat, the clean clothes you wear, the bed you sleep in, the trees and bees; plus the micro-moments, such as the Bluebird perched outside your window, the neighbor walking his dog, the drop-by visits of friends or family.

If we look, we will find blessings in all these things – people, experiences, situations, and events.  Indeed,  the comparative isolation that many will experience for Thanksgiving 2020 provides a huge opportunity to find blessings in the details of our daily life, blessings that we often overlook – what author Tish Harrison Warren calls “the sacred practices in everyday life” in her book, The Liturgy of the Ordinary.

None of us should need a special day to count our blessings or express gratitude. But, the fact is, most of us do.  That’s why Thanksgiving 2020, despite the disappointments, will provide many of us with the opportunity to turn uninvited solitude and unplanned tranquility into an occasion for thoughtful reflection – and gratitude for our many blessings as individuals, as family, as a community, and as a nation.

Even when things go very badly, it is useful to recall the incomparable words of serenity, often an expression of gratitude, written by Horatio Spofford of Chicago in 1873 after losing his four daughters when their ship went down in a trans-Atlantic crossing: “When peace like a river, attendeth my way, / When sorrows like sea billows roll; / Whatever my lot, Thou hast taught me to say, / It is well, it is well, with my soul.”