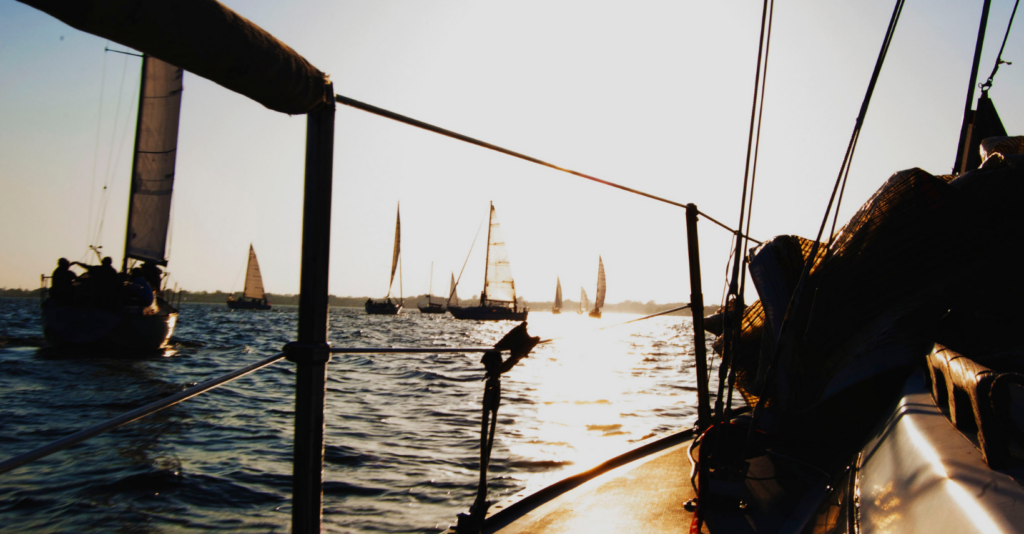 by Phil Burgess, Unabridged from the Life section of the Annapolis Capital, Sunday October 31, 2021

“Come for the sailing. Stay for the friendships.”

If that sounds like the kind of invitation that might flourish on the Chesapeake Bay, it is.

In fact, the “sailing and friendships” call-to-action is the moniker of Singles on Sailboats – known as SOS – a Chesapeake Bay organization that has thrived for more than 40 years.

Founded in 1978, SOS is a spirited nonprofit of more than 400 single adults – from novice sailors to seasoned skippers who fill their spring, summer and autumn months with sailing, rafting and socializing with others who enjoy sailing.  And members hail from Virginia and Pennsylvania to Delaware and New Jersey – and points beyond.

I learned about SOS from long-time member, Lorraine Fassett, a retired teacher now living through her 89th circumnavigation of the Sun. I met her by happenstance as she was leaving Vin 909 after a hearty dinner with a friend and fellow SOS member, Nancy Briggs of Eastport, a retired teacher, principal and Virginia school administrator.

Seeing Fassett’s energy and enthusiasm for sailing, I asked her if we could meet again for a longer conversation.

Meet we did, a few days later, at her comfortable home in Heritage Harbour, Annapolis’ premier 55+ community, where I first viewed her sailing resumé and learned about SOS.

Fassett said, “I love SOS because I love sailing, I love teaching sailing to those who want to learn, and I love the camaraderie that’s a defining feature of SOS”.

Fassett added, “In addition to sailing, we have many social functions – some at sea but also on-shore gatherings, with cookouts, dinners, dancing, and late-night conversation aboard in a cockpit, or below in a cozy salon.”

Then Fassett revealed, “SOS is my second family. There’s a lot going on in SOS – day sails, weekend cruises, and extended cruises, both on the Chesapeake Bay and in other sailing hotspots around the world. SOS is run entirely by volunteers, so helping to make SOS work for me and other area sailors is a key priority in my life.”

Fassett also noted that SOS is not just a fair-weather club. “From the dark and chilly months of November through March, members open their homes to host fireside chats, holiday dinner or afternoon brunch, with members and guests gathering to enjoy good food and drink – and stimulating conversation followed by an hour-long program on sailing-related topics.”

To make sure I fully understood, Fassett – a SOS First Mate and experienced sailor on her own 30’ Catalina which she sailed for more than 13 years – said, “You can never learn too much about sailing. Whether it’s navigation or knots, electronics or engine maintenance, docking or anchoring, you’re always learning something new. It’s all part of the experience that makes sailing so physically invigorating and intellectually challenging.

SOS also appreciates Fassett. She has received several major awards over the span of her 32-year membership.

Pitching in is nothing new for Fassett. More than 20 years ago, she initiated the current SOS Bareboat program to charter bareboat cruises in destinations outside the Chesapeake Bay.

SOS Bareboat has since planned and managed more than 25 charters, including Australia and Tonga in the Pacific; Italy and Turkey on the Mediterranean; the Greek Islands in the Aegean Sea; the Caribbean Islands; the Swedish archipelago; and in the US, Lake Champlain and down the coast of Maine. In 2022, the SOS Bareboat sailors will return to the BVIs.

Fassett is one of the most interesting among the hundreds of bonus-years women I have interviewed over the past decade I have been writing about people engaged in productive and satisfying activities in later life.

Fassett was born in 1932 in New York City and raised in Boonton, New Jersey where she graduated from high school in 1949. She became a Registered Nurse after earning her RN degree from Mountainside Hospital in New Jersey and later her bachelor’s degree from Jersey City State College in school nursing and health education in 1971.

After raising a family in New Jersey, including two children of her own and three stepchildren, Fassett moved to Maryland in 1974, where she began her teaching career in Montgomery County Schools where she taught health education and sex education.

During the next 23 years, she earned two master’s degrees from Hood College in Frederick, one each in psychology and counseling, before retiring from teaching in 1997. “I’ve always loved learning.”

When I asked what triggered her decision to retire, she said, “There were other things I was eager to do.”

“Still,” she said, “the decision to retire was not an easy one. I love teaching.” She then held up a pillow with embroidery that said, “I touch the future. I teach” – the inspiring words of Christa McAuliffe, the teacher-astronaut who perished in the Challenger space shuttle explosion in 1986.

“A student gave that to me many years ago.  It means a lot to me, not only because it’s a cherished memory but also because it states an important truth:  Teaching young people is a vital calling because it helps shape the next generation.  For that reason, teaching is also a huge privilege and a large responsibility.”

“So, when I thought about retirement, I knew I wanted to sail more and learn more about sailing – and help others to learn about and enjoy sailing.”

Fassett did have other interests.  She was a potter, a skill she used to make everything from cups and bowls to canister sets.

She was also an antique dealer for many years while in Gaithersburg.  Because she has a sharp eye for artifacts, she bought stuff at yard sales and auctions and then spruced them up for resale – sometimes in antique stores in the area and sometimes at outdoor antique shows in the region.

“So, retirement for me was a decision to continue long-standing interests, but with the freedom to reallocate where I spend my time. Now I’m able to give more attention to relationships (including two grandchildren and a great-granddaughter) and activities that are most important and satisfying.”

As I was skimming through SOS materials, I came across verses by Oliver Wendell Holmes (the elder): “To reach the port of heaven, we must sail. / Sometimes with the wind and sometimes against it. / But we must sail, and not drift, nor lie at anchor.”

I thought as I read this: I have come to know a spectacular woman who can sail with the wind and against the wind – both in life and on the water – but she will never drift and certainly never lie at anchor on this side of that great port in the sky. That’s Lorraine Fassett.