What to do when your career is over but your life isn't. 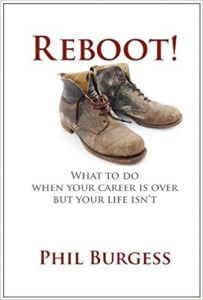 "It’s better to wear out than rust out.”  That is the message of Reboot!  While American culture glamorizes retirement as the “Golden Years” of endless leisure and amusement, Phil Burgess rejects retirement, as he makes the case for returning to work in the post-career years, a time he calls later life.  Based on solid research from the social and medical sciences, the author says, “It is better to die with your boots on, fully engaged in helping others and repairing the world.”

Reboot! is partly autobiographical.  Indeed, the author is working well into his own post-career years, following two failed retirements.  He is also convincing in his eye-opening, historically rooted, and hope-filled arguments for engaging in life-long work that is productive and satisfying.

With America’s 78 million baby boomers turning 65 at the rate of 10,000 a day for the 18 years between 2010-2028, Reboot! provides a timely and provocative alternative to the conventional idea of retirement.  With the promises of Social Security and Medicare about to be broken, Reboot! provides an upbeat and constructive way to plan for retirement within the new financial realities.

For men and women navigating and planning for life’s transitions, striving to finish well, Reboot! provides a roadmap for living a life of meaning,  challenging the reader to be a booter, not a retiree.  Burgess boldly asserts that retirement is a deadly disease, and that work after a life of work is the best option for post-career years that are meaningful, productive, healthy, and satisfying.

"Longevity is perhaps the greatest achievement of the 20th century. From the beginning of man's time on Earth until 1900, life expectancy increased by about 30 years. From 1900 to the present, it has more than doubled, increasing another 31 years."
“If retirement at age 65 were indexed to reflect longevity increases since 1935, when Social Security was established, America’s official retirement age would now be 82.”

"Dispense with retirement. Instead, invent a story line for your post-career years, beginning with who you are and what you want to do, then write the script and get on with it! That's what this book is about - a strategy for writing the script for the post-career years of your life."

"The key to…post-career success is achieved by purposeful involvement with other people and engagement in a productive and satisfying activity."

“There is much work to do in this world where we are but temporary inhabitants. We should find it and do it…at least for as long as we’re able. In many ways, our life depends on it.”

“It is lifestyle – not wealth, race, or genetics – that plays the greatest role in allowing us to live well in later life. The lifestyle choices we make – including the decision to remain engaged through work – are keys to longevity and successful aging, not only in the US but in different cultures around the world.”

"Work should not be separated from the rest-of-life [or] compartmentalized – as in the dreadful phrase 'work-life balance.' Instead, work should be viewed as an integral part of – in harmony with – our whole life because work is at the core of daily activity that binds us to others and to the common good, in addition to whatever other social or financial benefits we get from working."

On Different Types of Work...

“For most of us, post-career work will be tailored work, work customized to reflect our needs, our deepest desires, and the highest and best use of our gifts – especially time, talent, and treasure. Work tailored to our gifts will be productive and satisfying.”

“Work comes in many flavors, especially in later-life when we have more flexibility. These include: (1) paid work, (2) in-kind work, (3) volunteer work, (4) Samaritan work, and (5) enrichment work. In each of these you have obligations and accountabilities to other people. That’s always the case with every type of work.”
“Because of the digital revolution, work in today’s America can be performed in many locations: at home or the office, in the field or factory, or – with the rapid growth of the mobile Internet – on the go…"

On Work and Money...

“For some, later-life work is essential, especially if you didn’t save enough or your 401k tanked in the Great Recession. In these cases, work will be tailored to meet the social, financial, and well-being needs you are likely to confront in your later years.”

On Work When more than Money Matters...

“Work is not only about money. Even if you don’t need the money and your financial situation is stable and comfortable, returning to work in your post-career life is the smart thing to do – at least until sidelined by frailty or disability. It’s smart because good health and satisfaction in later-life are most likely to come from working.”

"When we retire, most of us are healthy and at the top of our game, still able to contribute to family, community, and the larger society. That's why it makes sense, both practically and morally, to continue to use our gifts to help others and to make the world a better place. We are able to do it, and we should do it."

On Work in a Spiritual Context...

"A spiritual concept of work is that work is made for man – not man for work. The mistaken idea that man is made for work would include everything from slavery to workaholism. That’s not the healthy view of work we are talking about in Reboot!"

"A life of meaning for most people – religious, New Age, or secular – is to seek to do good and be virtuous, to help others and to make the world a better place."

"Looked at from a Judeo-Christian perspective, work well done has a moral dimension: work is both a form of worship and a form of service. In fact, the ancient Hebrew Scriptures use the single word avodah to express all three ideas: 'work', 'worship' and 'service.'"