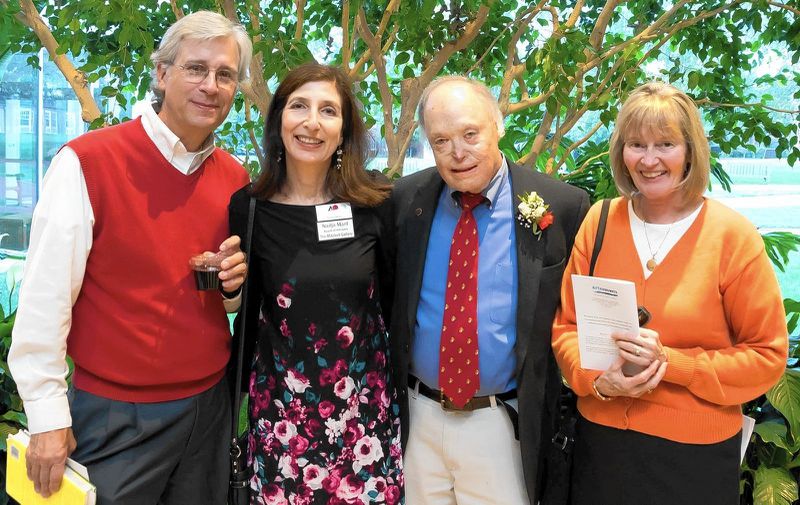 From left, John Frece, Nadja Maril, the late journalist Robert "Bob" Timberg and Priscilla Cummings at a reception for the Annie Awards. Frece has built a life in retirement that involves writing, grandparenting and advocacy. (by Don Dement / HANDOUT)

by Phil Burgess, Unabridged from the Life section of the Annapolis Capital, Sunday July 28, 2019

Photo above: from left, John Frece, Nadja Maril, the late journalist Robert “Bob” Timberg and Priscilla Cummings at a reception for the Annie Awards. Frece has built a life in retirement that involves writing, grandparenting and advocacy. (by Don Dement / HANDOUT)

When we were younger parents, we found that many of our friends were the parents of the friends of our kids.  As we grow longer in the tooth, we are finding the same pattern – as new acquaintances are made because of grandchildren.

This happened last week in the Anchorage neighborhood swimming pool.  Mary Sue and I were “swimming” with our two toddler granddaughters – Adelyn and Lilly.

Despite the heat, we were alone in the pool when another set of grandparents brought grandson Liam, 14 months, to the pool.  Liam’s parents live in our neighborhood and the grandparents, also Annapolitans, were babysitting.

Of course, we started talking and comparing notes as grandparents.  Nothing new about that – nor about babysitting grandkids.  It always happens – and is part of the joy of grandparenting.

But these grandparents – John Frece and Priscilla Cummings, now in their 36th year of marriage – were both inspiring people with fascinating careers and interesting views on retirement.

I discovered this when I asked John, “What did you do in real life?”

Answer: He started as a journalist, first as an editor-reporter-photographer for the weekly Reston Times.  “When you work for a small paper, you are responsible for everything – from reporting, writing and page layout to dark room work.  It’s great training.”

I also discovered that Priscilla Cummings, herself a former journalist, is an award-winning author of 24 children’s books, including the best-seller Chadwick the Crab and children’s novel Red Kayak.  But hers is another story for another time.

In 1976, Frece left local news to join United Press International to cover the state Capitol in Richmond, VA. Two years later, UPI moved him to Annapolis to cover Maryland’s governor and legislature and, in 1984, he became the Baltimore Sun’s State House bureau chief, a post he held for the next 11 years.

“I loved covering the State House – seeing how decisions on important issues are connected to the personalities and political ambitions of legislators, lobbyists and governors. The State House is a fascinating beat – you are forced to learn and understand the details of many issues – from health care to the death penalty to tax, spending or environmental issues. There is always a clash of interests, which I found fascinating. I really enjoyed it.”

In 1996, after nearly 24 years as a reporter, Frece joined the other side, spending the next 18 years working for Maryland state government and later the federal government.

“This was a tough transition. I often found myself having to challenge news stories about the administration that I knew, as a reporter, I would have written myself. The job was a bad fit. Fortunately, however, Governor Glendening gave me an opportunity to exit the press office and concentrate instead on ‘smart growth’, his new land use initiative.”

He called smart growth a powerful concept for urban planning.

“Smart growth aims to discourage sprawl by concentrating growth in compact areas that are transit-oriented, walkable, bicycle-friendly and diverse. Part of the goal is to protect waterways and air quality, preserve open space and critical habitat, and advance everything from historic preservation to digital connectivity – all making communities more appealing places to live, work and play.”

For the remainder of his career, Frece worked to advance “smart growth” ideas in Maryland and around the nation – including six years with the University of Maryland’s new National Center for Smart Growth beginning in 2003 until 2009.  That’s when he joined the Environmental Protection Agency in the new Obama administration – as director of the EPA’s newly formed Office of Sustainable Communities, established to coordinate federal resources to advance smart growth approaches in community development nationwide.

“This was a great way to end my career,” said Frece, who retired from EPA in 2014. “Now that I’m retired, I love it!  After a decade of commuting, I especially like sitting on my porch in the morning, reading the newspapers and listening to the hum of commuters – and thankful I’m not one of them.”

Frece quickly and easily transitioned from a go-go lifestyle to a slower-go lifestyle where he is still involved in storytelling and smart growth issues – though the pace has changed, and he now sets his own agenda.

“I now live a life without editors and only a few deadlines, all of which are self-imposed.  It’s a good life.  If I want to spend the afternoon with you, or play guitar, or sail, or play golf, I can.  If Priscilla and I are needed to babysit Liam, we can do it.”

“Danny Brewster had an interesting, but tumultuous life. He was blessed with everything – wealth, war hero, well-educated, political success, beautiful wife – and then lost it all due to drink, only to reform his life, regain his stature, and start a new family. It is really a story of personal courage to overcome debilitating problems.”

Brewster, a direct descendant of Benjamin Franklin, was a leader in getting the Civil Rights Act through the US Senate in 1964.  That same year he also stood in for President Lyndon B. Johnson in Maryland’s presidential primary against the segregationist George C. Wallace. Brewster won, but it was a close, bitter campaign that tainted Brewster’s reputation and damaged his self-confidence.

“The Brewster biography is an interesting research and writing project and I am enjoying it,” Frece said.

Frece is also using his smart growth knowledge and experience as one of the leaders of the opposition to Crystal Springs, the senior living development proposed near the intersection of Spa Road and Forest Drive – now renamed The Village at Providence Point.

“Whatever the name, it’s still too large, would still remove far too many trees, would still amplify already-serious traffic congestion and — most disturbingly — could invite more extensive development in the future.”

As I listened to a man who says he enjoys retirement while still engaged in creative work, I heard him say, “I like the freedom of my bonus years.”  That one comment helped me make sense of the active “retirement” lifestyle of Frece – because it reminded me of St. Ignatius, founder of the Jesuits more than 450 years ago, who famously said, “Freedom is the ability to decide what is important.”

Frece is another example that positive retirement is not about endless leisure and amusement or hammocks and long vacations.  It’s about the freedom to follow your own instincts and set your own priorities.  Whether it’s babysitting a grandchild, writing biographies or preserving old growth timber along Spa Road, John Frece is still telling stories and seeking truth in a way that reflects his standards, his timetable and his perspective on what’s important – and in his case that begins with family, community and environment.