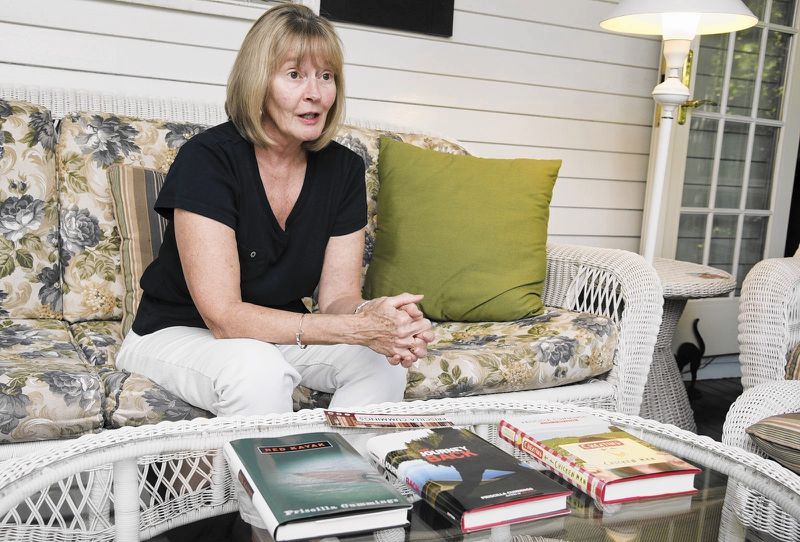 by Phil Burgess, Unabridged from the Life section of the Annapolis Capital, Sunday August 4, 2019

Renown cellist Pablo Casals once said, “The person who works and is never bored is never old.”

He went on to opine that continuing to work with an active interest in “worthwhile things” is the best strategy to achieve what we now call positive aging.  He should know because this luminary was active into his 90s, doing concerts and writing his autobiography, titled Joys and Sorrows, at age 93.

I thought of Casals last week when I interviewed Priscilla Cummings, the author of Chadwick the Crab, a best-selling children’s book published in 1986, with illustrations by A.R. (Alan) Cohen, then an art teacher at Wilde Lake high school in Columbia, MD and now retired and raising bees in Harford County.

Mary Sue and I read Chadwick… to our children at least 50 times during their growing-up years on the Chesapeake Bay, and that doesn’t count all the times they read it on their own.

According to one reviewer, “Chadwick the Crab is a great book for children to learn the big idea of reaching for their dreams.”  Chadwick’s dream is to live in the Baltimore Aquarium, in part to avoid going to the bottom of the Bay in the winter.

In reading Chadwick, you also learn a lot about the Chesapeake Bay as you meet his wide circle of friends – quiet Orville Oyster, a fussy, near-sighted egret named Matilda, Bernie the Sea Gull, Toulouse the French Canadian Goose, and especially Esmerelda, the prettiest she-crab in the entire bay.

When all is done and dusted, this one little crab achieves his very big dream and, in the process, avoids ending up as crab soup in a Baltimore restaurant.

After 16 rejections, Chadwick… was published and went viral before we knew what viral was.  As readers asked for more, Cummings and Cohen responded with five additional Chadwick… stories each one teaching young children – as young as age two – something about the plants, wildlife and other natural as well as man-made features of the Chesapeake Bay. The book is still in print and this year the publisher has re-issued the four original stories in “The Chadwick Treasury,” with a new cover by A.R. Cohen and a foreword by Chadwick himself!

Following her graduation from the University of New Hampshire with an English major, Cummings began her career as a journalist, working 10 years as a newspaper reporter for four different newspapers in four different states, and later as a writer and editor for Baltimore Magazine.

During this period, she won United Press International’s 1980 “Journalist of the Year” for Virginia for her series on “Women in Prison” – the first of many writing awards that would come her way over the next 35 years.

“I always wanted to be a writer; it seemed journalism was as close as I could get.  As things turned out, journalism was great preparation for my life as a writer of children’s books.”

During her years as a reporter, Cummings met journalist John Frece, for 17 years the Annapolis statehouse bureau chief, first for UPI and then the Baltimore Sun.  Frece and Cummings married in 1983.  Three years later, in 1986, Cummings gave birth to William and three years after that, in 1989, to Hannah.

When their children came along, Cummings decided to pause her career in journalism to stay home to raise her children.  She never regretted that decision, but soon had the itch to write again.

“Finding time to write while caring for children was always a challenge.  The challenge increased with the passage of time.  In the early days of parenting, the kids took long naps.  That provided good writing time.  But as they grew older, long naps turned into no naps.”

“Once into the no-naps years,” Cummings said, “I turned to in-home childcare to buy time to write – not unlike other mothers whose work took them outside the home.”

As her children were growing up, they were a constant source of inspiration for Cummings’ books.

“The kids asked questions and showed interest in things that I could address in my stories.  I was in tune with issues geared to them.  In that sense, they were very much participants in my writing.”

When her children entered school, Cummings switched from writing stories for picture books to writing novels for young people.  Of her eight middle grade and young adult novels, the most famous is Red Kayak (2004), named to the “Best Books for Young Adults” list of the American Library Association.  Red Kayak was followed by two sequels, The Journey Back and Cheating for the Chicken Man.

As I skimmed through her novels for young people, including Red Kayak, I found that each presents a morality tale, not unlike Aesop’s Fables – think The Tortoise and the Hare or The Lion and the Mouse.   As our culture becomes increasingly secular, it is reassuring to see that lessons about right and wrong and moral dilemmas are still presented in fiction that is accessible by young people.

Cummings facilitates that accessibility by personal appearances at schools, book fairs and other events – more than 1,000 appearances since Chadwick… was published.  In fact, at one appearance, a little girl asked Cummings, “Does Chadwick live with you?”  “No,” I told her.  “He needs to live in water.”

Though her own children are now grown – William now lives in Shanghai, China, where he’s an IT vice president for Morgan Stanley; and Hannah now designs children’s books for Simon and Schuster and lives in Annapolis with her English-born husband, Joe Carroll, and their 14-month-old son, Liam – Cummings is enjoying her life as an empty nester with husband John, who is also retired.

“John and I are in new grooves, and they are good – and many are shared. We are both writing different kinds of books and articles, but we remain each other’s ‘first reader.’”

They also cherish their new role as grandparents and babysit young Liam every Tuesday and Thursday. That allows Hannah, who works from home just as Priscilla did, to have more unencumbered time to focus on her job.

“We also love to travel. We are going to the beach with Hannah, Joe and Liam this summer – and to Ireland in September.  At some point, we hope to visit our son William in Shanghai.”

Cummings also revealed her continuing desire to write.  “I want to try different kinds of writing.  Maybe short stories, a memoir or another middle grade novel.  The truth is I’m happiest when I have a writing project.”  Not surprising to hear from an author who has produced 17 picture books and eight novels.

Cummings also noted that retirement is a time to give back. This fall she will be talking about writing to a group of inmates at the women’s prison in Jessup.

“They are reading some of my books now, and I will be discussing the writing process with them and hopefully prompting and advising them in their own writing projects,” she said. “Though writing is work, it can also be therapeutic – and fun.”

Cummings’ approach to her work on her “free” days is to rise early, write for 4-5 hours, take a break to relax, have lunch and do things that have to be done around the home.  She then spends the afternoon doing research, editing and responding to emails.

As we wrapped up our afternoon conversation, Cummings’ comments about her continuing desire to write and try new genres reminded me again of the spirit of Pablo Casals.  When asked in his 90s why he kept practicing his cello, he mischievously said, “I’m beginning to notice some improvement.”

Whether it’s cellist Pablo Casals or author Priscilla Cummings, it’s clear that those who never stop learning never stop living a life that is productive and satisfying, regardless of age.  Besides, as Cummings says, “Writers never retire.”