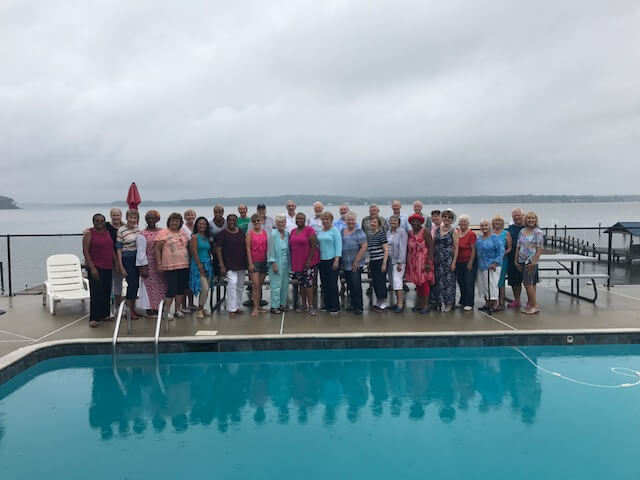 Showstoppers use gifts of music and dance to engage, entertain

by Phil Burgess, Unabridged from the Life section of the Annapolis Capital, Sunday November 5, 2017

I had an amazing experience last week when I showed up at the South County Senior Activity Center in Edgewater for the weekly rehearsal of Showstoppers, a senior performing arts group with ages ranging from 60 to 94.

I was there because Sharon Poet, who retired as director of the center in 2010 and now provides technical support to the Showstoppers, sent me an email saying, “I’m surprised you’ve not written about the Showstoppers. It’s a unique group of 50 plus talented seniors — dancers, vocalists, comedians and instrumentalists — who have a love and passion for the performing arts. If a magician showed up, we would do magic.”

A few days later I met with Poet and Showstoppers Director Joanne Dewilde, who also serves as the producer and master of ceremonies for the shows and choreographer for many of the dances.

We met at my “office” at the Barnes & Noble cafe in Annapolis Harbour Center, where Dewilde and Poet waxed enthusiastically about the Showstoppers and how they create three- to five-minute routines that can be combined to form a one-hour variety show tailored to specific audiences.

Dewilde said, “Some have been dancing, singing or playing musical instruments since their youth and are quite proficient. Others are beginners. Either way, later life is a great time to burnish your gifts in the performing arts by actually performing.”

Dewilde continued, “Performers like to perform, and seniors care about other seniors.” The Showstoppers perform at continuing care retirement communities, such as independent and assisted living and nursing homes, veterans’ homes and other senior centers in Anne Arundel County and beyond.

Showstoppers also perform at luncheons and special events for fraternal and service organizations such as Rotary or American Legion or other community organizations. “Our favorite song, which we love to sing at the end of a show,” Dewilde offered, “is ‘God Bless America’ or sometimes the Bee Gees’ ‘Stayin’ Alive.’ ”

When I walked into the south county center at 9 a.m., the place was a beehive of activity. Many were leaving as their morning yoga or other fitness classes concluded.

Others were entering for classes — from the history of the Colonial era or the history of Islam, to skills from how to write an autobiography to ceramics and computer classes.

By that time, many of the Showstoppers had already arrived and were warming up in the auditorium. The first sounds I heard above the center’s lively buzz were the lyrics “… a partridge in a pear tree” as Showstoppers vocalists were practicing “The Twelve Days of Christmas” in preparation for holiday season performances.

A little later, Carl Smith, a volunteer line dancing coach, was introducing a new routine to 20 dancers, ages 60 to 90. Called the Silver Liners, they demonstrated great dexterity, an eagerness to learn new steps and dedication to dance in sync with each other and the music, “Let’s Hang On.”

When one of the dancers asked 94-year-old Peg Colt, “How’d we do?” she answered, “Needs some practice.” But she said it with a mischievous smile. Dewilde told me, “Peg always has a smile on her face — plus a can-do spirit. She lights up any group.”

Colt, decked out in a stage-ready black party gown and rhinestones, had to give up tap dancing after back surgery. But she has a talent for lip-syncing. Colt said, “After lip-syncing ‘Second Hand Rose,’ a member of the audience told me, ‘I love your voice.’ ”

Colt added, “I’m not sure she knew it was Barbra Streisand’s voice she heard, but I accepted her compliment without explanation,” giving me another playful smile.

Heidi Kammer, a guitarist and vocalist with the 15 or so Harmony Grits singers, continues to use talents she honed as an active-duty member of the U.S. Navy Band from 1973 until she retired in 1995. She said, “I loved the Navy because I could use my musical talents to serve my country. I know it sounds corny, but it’s true.”

She continued, “I love Showstoppers because I can continue to sing, but I’m also doing new things such as helping with choreography.”

As the So’ Ole Sistas were singing “Hit The Road Jack,” Kammer said, “I also need to hit the road. My husband just retired, and I’m going to take him out to lunch.”

Flo Keeney, 90, is another remarkable Showstoppers member. Music is in Keeney’s genes. Her father, Don Keeney, owned an Annapolis-area music store and also played in the U.S. Navy Band. “Though my father owned a piano store, I hated piano lessons. Now that’s my job,” she quipped.

Keeney lost her vision in her right one eye a few months ago, but it has not impaired her music or her ability to drive. “Physical problems are part of aging,” she said. “The important thing is to not be afraid and to keep on pumping and pushing.”

She continued, “I love Showstoppers. It’s what I love to do. When I hear music, I can’t stand still. I become a part of it.”

About that time, the Harmony Grits were onstage belting out the gospel favorite, “Do Lord, Remember Me,” and Keeney began to jive with the music. “Sorry about that. I just love that music.”

I also talked to Ruth McDonald, 90, who was wearing a “Rhythm and Boos” T-shirt, in honor of the season. With 12 grandchildren and 12 great-grandchildren and lots of international travel under her belt, she has been line dancing for 30 years — not just for Showstoppers but also with line dancing groups in Arnold, Glen Burnie and Odenton — in addition to her Tuesday aerobics at the senior center.

“Line dancing is fun and it’s good for you. It is also something you can do when you don’t have a partner. There have been weeks when I was line dancing every night,” she said.

McDonald retired from Safeway after 28 years, first as a cashier and then in the office. “At Safeway,” she said, “you are always a cashier when the lines get long. Customers first.”

Barry Maberry, 84, retired after 40 years as a Washington, D.C.-based Lutheran pastor. Maberry now lives at Heritage Harbor in Annapolis and has been with the Showstoppers for nearly 10 years. He loves acting and singing — in addition to golf and tennis.

Maberry has also found time to author a book about the importance of body, mind and spirit in aging. “What do you think is the secret to a long life?” I asked. Mayberry replied, “Keep breathing.”

Maberry is also valued because he introduced Tom Zamer to the Showstoppers. Zamer, 78, is a D.C. native who has lived in Annapolis since 1999. He retired in 2012 after a career in telecommunications.

Zamer, a piano and guitar player, said, “Showstoppers is a gold mine. I love being with people and I love the opportunities for musical performances.”

He said his interest in music came at a young age as he watched the victory parade at the end of World War II. So, he learned the piano early on and, for a while, played in a band called The Prophets and now plays piano and guitar in Showstoppers events.

The Showstoppers, like any other activity with lots of moving parts, needs an organization. The board chairwoman is Rose Brown, a senior volunteer. Her enthusiasm for the Showstoppers is palpable, but unlike most of the others, she hesitated when I asked her about her age. “Let’s just say I’m over 65,” she replied in a “don’t-push-me-on-this” voice.

She added, “I never tell my age. I think you should be as active as you can for as long as you can. You should not let yourself be stereotyped by age. You’re only as old as you feel. What you look like on the outside is not what you feel on the inside — where many of us still feel sexy, cute and creative.”

After a career as an affirmative action officer at the U.S. Postal Service in D.C., Annapolis is now what she calls “my second home, and I came to the senior center to begin my second life.”

And a second life it is, addressing the needs of Showstoppers performers and the needs of the Showstoppers organization for policy, funding and oversight. “Though we are all volunteers, being here is not busy work. It’s like a job, and we all like that we can continue to make a contribution.”

As we parted, Brown said, “I love it here. It’s the best center around. Just look out to the auditorium. You see everyone smiling, having fun and working hard, too. Sometimes we like each other; sometimes not; but we all get along. And when we perform, we give the audience something. But they also give us something. It’s called satisfaction.”

When I asked Brown her secret to a long and fruitful life, she said, “Just forget you are aging. Live your life to the fullest. Your body will tell you if you need to make adjustments.”

As I drove away from the south county center, I recalled reading someplace that a healthy life includes six elements: mental stimulation, vigorous exercise, at least one social engagement a week, a healthy diet, adequate sleep and time to reflect.

Why is the senior center and the Showstoppers cherished by so many people? One reason is that it provides the first three of the six elements of a healthy life, all of which are essential to successful aging. Besides, like the pub in “Cheers,” you want to go “where everyone knows your name and everyone is glad you came.”