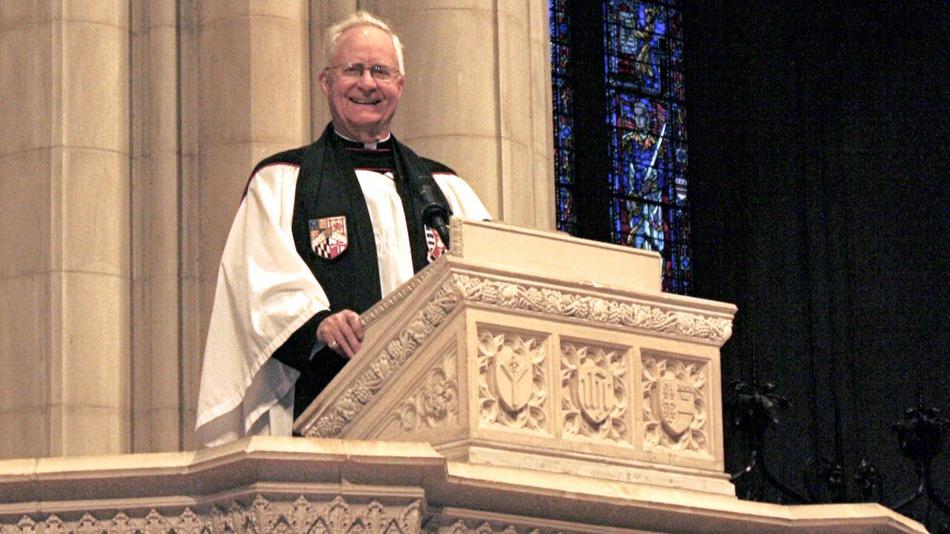 Retirement, for some, is an opportunity to keep on serving

July 29, 2018/Phil Burgess/Comments Off on Retirement, for some, is an opportunity to keep on serving

by Phil Burgess, Unabridged from the Life section of the Annapolis Capital, Sunday July 29, 2018

(Dick Libby, of Annapolis, officiated at the Kirkin’ o’ the Tartan at Washington National Cathedral in 2010, 50 years after he had been ordained there as an Episcopal priest. [Capital Gazette])

Poet Robert Browning talked to us about “…the last of life for which the first was made.”

For some, the link between the first of life and the last of life is hard to see.  I’m thinking here of those who post-career lives are driven by purposes and activities that are very different from the lives they lead during their career.  Example: The electrician who retires to a life of active leadership in his neighborhood association and teaching photography at the local community college.

In cases like this, the transition is a new story where only the names remain the same.

But for others, the integration of the first of life with the bonus years is a reboot, not unlike a movie franchise – such “Avenger” or “Mamma Mia”, both of which have been recently showing on local big screens.

This past week I talked with a man whose transition from his career work to his new life has been an almost seamless reboot.  I’m referring here to Annapolitan Dick Libby. 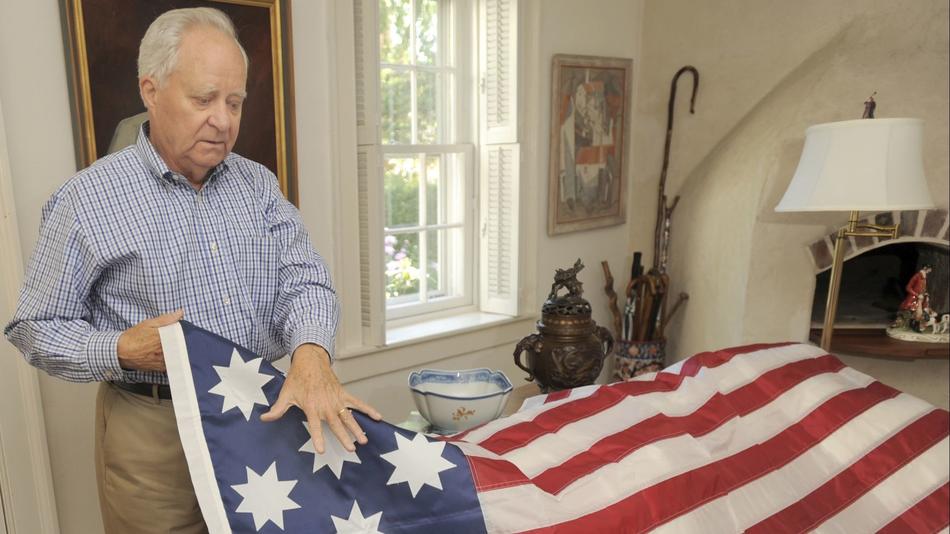 Using a replica of the original John Shaw flag, Dick Libby, a flag historian, explains the canton and stripes, and how the flag was displayed. (Capital Gazette file)

Dick Libby and Kathryn, his wife of 57 years, are really transplanted Yankees – having spent most of their married life in Connecticut where they raised two boys – and now have four grandchildren, between the ages of 10 and 18.

Libby was born in Darien, Connecticut, in 1932.  After graduating from St. Albans School in Washington, D.C., he earned his undergraduate degree in history from Trinity College in Hartford, Connecticut, in 1954.  To this day, history is one of many interests he continues to cultivate.

After college, he served for three years as an officer in the US Air Force where he was one of the guardians of the Cold War’s distance early warning system, called the DEW line.

During this time, Libby also earned his private pilot’s license and co-owned an Aeronca “Champ,” a small, fabric-covered aircraft known as a “tail-dragger.”  Flying is one of the few activities Libby left by the wayside as he moved through life.  “To be safe, you have to fly a lot.  To fly a lot is time-consuming and expensive.  Bad choice.”

Following his military service, Libby earned a Master of Divinity degree from General Theological Seminary in New York City in 1960 and ordination as a priest of the Episcopal church.

After that Libby spent most of the next 37 years serving as the priest of Episcopal churches in Niantic, Newington, Branford and Milford – all in Connecticut.

When I asked Libby how he and Kathryn ended up in Annapolis, he replied, “After spending a lifetime following me around New England to the churches where I was called, we agreed it was time for Kathryn to choose where we would land for our retirement years.”

Libby continued, “We explored California, but after a few days, my eldest son, who lives in Alamo, said, ‘Mom, you are East coast, not West coast.’  Kathryn nodded agreement, and she led us to Annapolis, where we have lived since 1999.”

And live they have.

First, reflecting their interest in history, they planted themselves in the heart of the historic district, where they occupy a beautiful historic home on King George Street, across from the Naval Academy and adjacent to the Hammond-Harwood House, a preserved 1774 home with tours showcasing its Colonial furniture, original art and fine architecture.

Both Dick and Kathryn are volunteers at HHH where Dick also served as a trustee of the Museum – and president from 2012-2014.

In addition, their home is filled with history. Beginning with a collection of toy soldiers meticulously organized in different formations in two separate, lighted display cases.  One contains “Britains” (– some from the Revolutionary War era.  The other houses WWII soldiers – plus tanks and warships.

“These are toy soldiers I played with as a child.  They are fascinating, even today.”

He also has a collection of more than 80 flags of the Colonies and regiments that fought the American revolution.

According to Libby, “I have a long-standing interest in history, so the 1976 bicentennial caught my attention.  That’s when I became interested in vexillology (the study of flags) and the many political and military flags of the Revolutionary period.  Every flag is a work of art and every flag has a story.”

Second, Libby has continued his calling as a priest.  Libby explained, “When you are priest without a parish, the first thing you do is find another parish where you can be useful.” 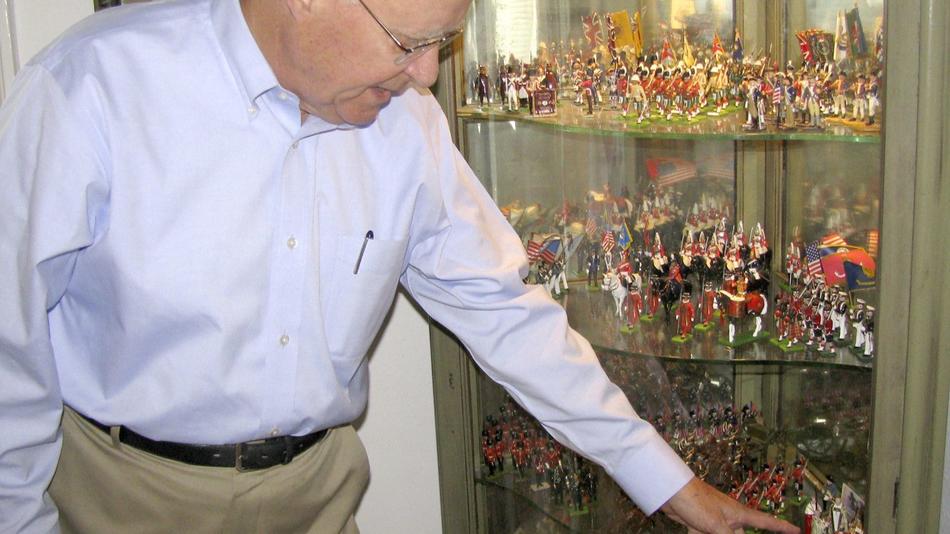 That he has done in spades.  Libby is a parishioner and an associate priest at St. Anne’s in Annapolis; a chaplain at the National Cathedral in Washington where he was ordained and where he continues to celebrate noon Eucharist services once a month; an occasional chaplain at Ginger Cove; and chaplain for St. Andrew’s Society for both Baltimore and Washington. He has also served as interim Rector at St. Andrew’s Pasadena, St. Andrew’s Mayo and St. Christopher’s Gibson Island.

In addition, Libby fills in for ailing or vacationing clergy in the Annapolis area, which he enjoys because, in his words, “Your time is primarily devoted to leading worship services with some pastoring.  No administrative work. No business.  Just serving the spiritual needs of the flock.”

Third, Libby is active in local community organizations.  He is a long-time member of Rotary, having served as president in years past, and since coming to Annapolis served from 2004-2011 as the District Chairman for Interact, a Rotary-sponsored service club for young people 12 to 18.  He has also served on the race committee of the USNA Sailing Squadron.

Duly chastised, I was thinking Libby is a good example of once a historian, always a historian.  Once a preacher, always a preacher.  Once you are into serving people, you always seek opportunities to serve people.

About that time, he said, “You know, when all is said and done, people are fun.”