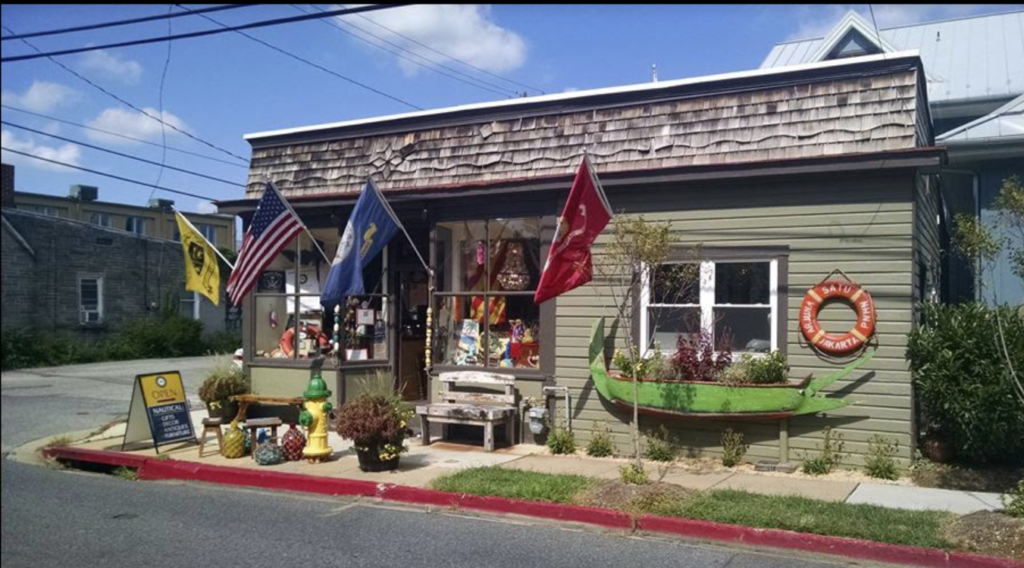 by Phil Burgess, Unabridged from the Life section of the Annapolis Capital, Sunday August 5, 2018

For a living example of “Fitzgerald’s Law,” journey down to Annapolis Maritime Antiques on Severn Ave. in Eastport.  There, every Monday, Wednesday, Friday and Sunday afternoon beginning at 2:00, you will find Aimee Ewers (pronounced “yours”) Povich, a can-do, bonus years lady who minds the store.

Povich is not simply minding the cash register.  She is the store’s merchandising director.  But she is more like a one-person curator in a children’s museum.

Like a children’s museum, you can touch and feel the historic maritime artifacts on sale.  Brass and wood in many shapes and for many functions are surrounded by ropes, lines and nets – and bric-a-bacs and what-nots that would appeal to any serious boating enthusiast or collector of stuff related to the sea. 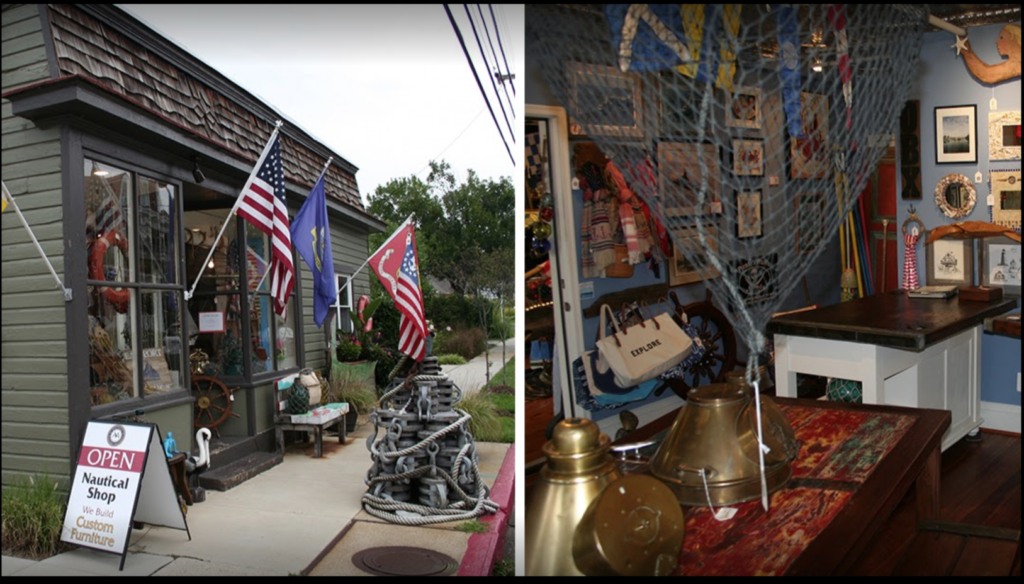 And like a curator, Povich knows about and will tell you the history of almost every maritime antique in the store – including interesting background and anecdotes about the historic WWII Liberty Ships whose beautiful, wooden hatch covers of many sizes and shapes have been converted into handsome coffee tables, dining tables, picnic-like benches, stools, standing bars and other attractive, maritime-themed, custom-built furniture for maritime enthusiasts.

“How did you learn about all this?” I asked, as Povich gave detailed answers to nearly every question I asked.

She explained, “I have always been interested in anything to do with the water.  That’s why I was so delighted to get this job, where I could spend every working hour immersed in things I love.”

She continued, “I learned a lot about the Liberty Ships from our owner, Tony Kime, who is a Liberty Ship aficionado.  I also use my down time at the store, when there are no customers, to read about the store’s artifacts and especially the history of the Liberty Ships, which provide the raw material for so much of the furniture that we build and sell.”

Povich is a new friend for me.  I first met her on this day when I wandered into the store and was delighted to discover that she could answer nearly every question I had about every artifact I picked up or pointed to.  She was a wellspring of knowledge – and interesting stories – about everything from antique brass red and green channel markers to the Liberty Ships.

Thinking that Povich was a late-40s/early 50s person, I asked, “What are you going to do when you retire?”

Giving me the RCA-dog look, she shot back, “I’m there already. I was born in 1954 – but I will never retire.  I love working.  I love learning new things and working with people to help them enjoy this wonderful world of ours – and especially the sea.”

Povich – who is related by a former marriage to the Pulitzer-winning sports writer, the late Shirley Povich, and to TV-host Maury Povich – has spent most of her adult life in public relations and events management.

She began her career with Philip Morris where she was an award-winning events manager for the Marlboro brand.  Promotional events included country music concerts, celebrity ski races, World Cup soccer, annual NFL Awards and Indy car races – including the Indianapolis 500, where her team received a Clio, the world’s most recognizable advertising award.

She has met more celebrities and high-performers from more arenas than anyone I’ve ever met.

Despite her status as a “senior” who began her professional life with a pre-computer Rolodex, Povich is fully computer literate and maintains a huge, Mac-based file of friends and clients she has coached: Top politicians and blue-chip country singers as well as tennis greats and Indy car drivers, including some of my favorites from growing up not far from Indianapolis – people such as Mario Andretti, Al Unser, and Emerson Fittipaldi.

In addition to typical events management stresses, her time with Philp Morris also coincided with the war on smoking.  “It’s a challenge to prepare a sports figure or country singer for a media interview when the first question is likely to be, ‘What’s it like to be sponsored by a company that kills 100,000 people a year.’”

“On the other hand,” she said, “it was terrific training and a great experience.  After PM, I was ready for anything.”

Following a six-year stint with Philip Morris, Povich worked through a series of more or less four-year jobs with all sorts of companies.  “After four years of doing creative work, it is best for the company and for you to move on.  The company gets new creative blood and you get a new opportunity to apply what you’ve learned in all your previous assignments.”

So far, she has worked in more than 30 countries on four continents and 48 US states – except Alaska and North Dakota.

Several of her assignments included working with the elderly.  I asked her what she learned in those venues.

“One of the most important is this,” she said.  “When you are dealing with an elderly person with cognitive impairment, such as dementia, and they have just returned from a trip to the art museum, you don’t ask them, ‘Where have you been?  What did you see?’  They often can’t recall details.  But if you ask them ‘How do you feel about today?’ their faces will light up and they may even give you an earful.”

Povich was born and raised in Washington, D.C. She is a third-generation graduate of Georgetown University, with a degree in the humanities.

After her son graduated from Bethesda’s Landon prep school in 2012 to attend Tulane University in New Orleans, she decided it was time to follow her passion to live on the water.  So, she moved to Eastport where she has an apartment overlooking the Severn River and Chesapeake Bay.

She dreamed of working for Annapolis Watermark, which provides walking tours, dinner and sightseeing cruises on the Bay and other water-related events.  When that didn’t work out, she found the antique shop where she works 15 hours a week.

She is also a home-based teleworker, working a 40-hour week as the catering coordinator for Moe’s Southwest Grill at 16 locations around Maryland, Virginia and Washington, D.C. – including City Dock.

Noticing papers she had gathered, I saw what turned out to be a three-page bucket list.  In addition to lots of travel to historic sites around the world, it also included: Get my MBA, read the Bible from cover to cover (with “Almost there,” scribbled in the margin), chase a tornado with a storm chaser, and dance the tango in Argentina.

Povich is always out and about.  If you don’t see her at Maritime Antiques, you may see her as a volunteer, working the Maritime Republic of Eastport Tug-of-War, the annual event to benefit local charities…or someplace else. She has also been a “sponsor-parent” to three Naval Academy women.  Aimee Povich is an expert at reinventing herself whenever there is an opportunity to help others.