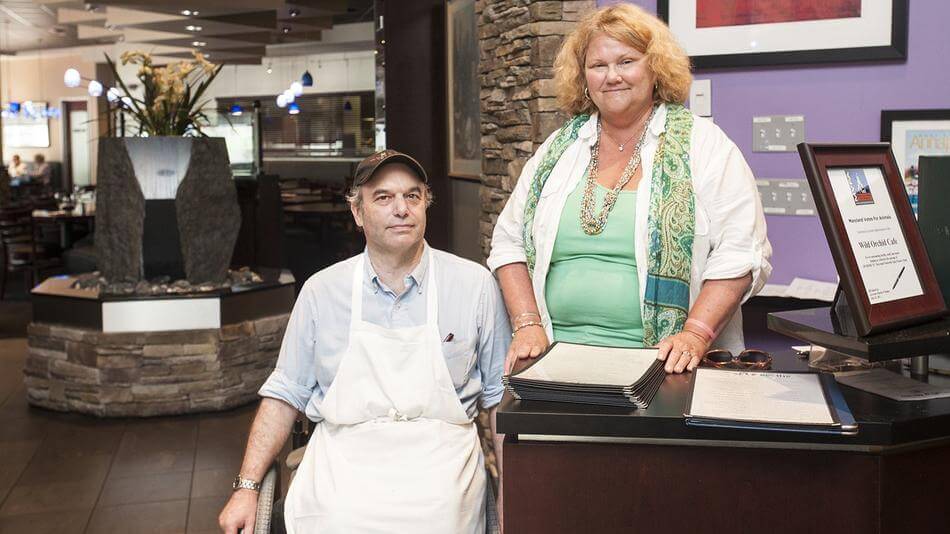 Annapolis residents Jim and Karen Wilder, pictured in 2014, aim to launch a new enterprise that reflects not only their culinary calling but also their commitment to creating opportunities for people with disabilities, translating a lifelong calling into a bonus years mission. (Joshua McKerrow / Capital Gazette file)

Annapolitans turn a lifelong calling into a later-life mission

April 27, 2018/Phil Burgess/Comments Off on Annapolitans turn a lifelong calling into a later-life mission

by Phil Burgess, Unabridged from the Life section of the Annapolis Capital, Sunday April 27, 2018

(Image: Annapolis residents Jim and Karen Wilder, pictured in 2014, aim to launch a new enterprise that reflects not only their culinary calling but also their commitment to creating opportunities for people with disabilities, translating a lifelong calling into a bonus years mission. [Joshua McKerrow / Capital Gazette file])

Last week, while attending the annual fundraising dinner of a Maryland nonprofit we support, I was seated at a table that included Karen and Jim Wilder.

The Wilders are widely known as chefs, caterers, restaurateurs, pioneers in the farm-to-market movement, and always serious people about the culinary arts and gourmet dining.

Their focus: serving fresh food that is tasty, healthy and locally grown, combining the classics in gourmet dining with Maryland-style cuisine — from string beans to grilled oysters, cream of crab soup and, a specialty, butternut squash soup with crab.

Put another way, if, over the years, you’ve had lunch or dinner at The Wild Orchid, Sam’s Waterfront Cafe, Harbour House, Phillips Seafood or Harry Brown’s — or if you’ve eaten a healthy burger at Market House or attended an event catered by Company’s Coming Catering — then you’ve probably experienced the culinary work and hospitality gifts of the Wilders.

Having passed age 60, the Wilders are about to launch a new social enterprise that reflects not only their culinary calling, but also their commitment to creating opportunities for people with disabilities, translating a lifelong calling into a bonus years mission.

Their background and the crucibles that have shaped their lives together are experiences that stimulated this new bonus years venture.

Jim Wilder was born and raised in Annapolis, where his 1976 graduation from St. Mary’s High School included four years of sports coached by Michael Busch, now a 30-year veteran and speaker of the Maryland House of Delegates.

At age 14, Jim started working at the Harbour House restaurant on City Dock, rising to assistant to the manager at age 16 and manager from 1972 to 1978.

He said, “In addition to learning about food, I loved the athleticism of a high-volume restaurant. I started as a food runner, so with three levels and — in those days, no elevator — athleticism was a requirement.”

Following a storm with severe winds, Jim climbed into a tree at his home to dislodge a large broken branch. Unfortunately, the falling branch struck him on the way down, causing him to drop 30 feet to the ground, severing his spinal cord, leaving him paralyzed from the waist down.

To this day, Jim uses a wheelchair, a disability mitigated by his remarkable proficiency with it along with an affable, engaging and upbeat personality that makes it easy for him to team with others. Anyone who spends an hour with him will come away understanding why that phrase “differently abled” is a truly meaningful concept.

Reflecting on his fall, Jim said, “I was in a full body cast for nearly a year when Harbour House manager Bert Kappel came to me with an amazing offer — to come back to work as a bartender since those duties could be performed on the ground floor from a wheelchair.”

He continued, “That job was a life-saver, and I will be forever grateful for the opportunity I had to get back to work. Despite my inability to stand or walk, I could still do many things — and I discovered that tending bar was one.”

During his years at Harbour House and after, Jim read every book he could about the hospitality business, focusing on food preparation, cooking and food presentation. By 1978, he was ready to move, landing the executive chef position at Harry Brown’s, a one-story, wheelchair-friendly restaurant on State Circle.

“After 11 years at Harry Brown’s, I came to the view that if I’m going to work this hard, I want to work for myself. Over the years I had saved around $20,000, so I joined with my cousin, also an investor, to start my own business,” Jim said.

After a cafe and catering venture located at Port Annapolis and later Annapolis Landing, Jim launched Company’s Coming Catering, where he was the owner, operator and executive chef until 2013.

During this period, he also opened The Wild Orchid in Eastport in 1996, now the home of Vin 909. Over the next 18 years, Jim transformed the small, startup cafe with limited seating into an award-wining restaurant with seating for 180 and revenues of $1.2 million.

The popular Wild Orchid was named in the top 100 many times over by Baltimore and Washington magazines, and Jim himself was twice named top chef by What’s Up Annapolis.

He said, “I wanted to create a dining experience that would provide the freshest seasonal products from local sources using time-tested gourmet techniques. I firmly believe that the best meal is from your own backyard — or a close to it as you can get.”

The opening of The Wild Orchid also prompted a second major milestone in his personal life. It happened as a result of his search for a person to run his front-of-house operations — making reservations, receiving guests, managing the wait staff, helping with the menu, etc.

According to Jim, “After an interview that clicked with every question, I hired Karen as the general manager of The Wild Orchid.”

Sporting a degree in theater from the University of Colorado and about the same age as Jim, Karen arrived in Annapolis in 1997 with four young boys — Andrew, 4, Nick, 5, Eric, 9, and Jeff, 14 — from Dallas, where she, too, was the owner and executive chef of a catering company.

According to Karen, “After two years on the job, romance bloomed. I warned Jim that with four boys, ‘I bring a lot of baggage.’ Jim quipped, ‘I have some baggage, too.’ So, in 1999 we were married. That’s when Jim inherited a complete family.”

Today, 35-year-old Jeff has a doctorate in sustainable agriculture; Eric is studying law; and Nick is a psychologist; and the Wilders have two grandchildren.

In the meantime, tragedy struck again. In 2009, their youngest son, Andrew, collapsed while working on a farm in Hawaii. When he returned to Annapolis, physicians discovered an undiagnosed glioblastoma brain tumor. After surgery, Andrew fell into a coma from which he never recovered, dying three months later.

The Wilders were devastated by Andrew’s death. Both of them dealt with crises by stepping up the pace at work — so a year later, in 2010, they moved the highly successful Wild Orchid from Eastport to a larger setting on Westgate Circle at West Street and Spa Creek Road, across the street from the cemetery where Andrew was buried.

According to Jim, “The new location not only brought us closer to Andrew, it gave us a new beginning in an upscale environment and extra space for catering and hosting events, even small weddings.”

But by 2013, the economic development of West Street was blunted by new development, especially the Annapolis Towne Centre. So, the Wilders shuttered both The Wild Orchid and Company’s Coming Catering. They needed a time-out to figure out what’s next.

After interim jobs — e.g., executive chef at Harbor Grill and later at Market House — they charted a new course.

According to Jim, “When you reach a certain age, you begin to think about what you’ll give back. When I experienced my paralysis in 1977, Bert Kappel gave me a chance to return to work. That was my runway to a new and productive life.”

He continued, “For the next phase of our lives, Karen and I have already rented kitchen space to launch Wilder Catering and Karen Wilder Events. We aim to have a successful business from a profit and loss point of view. But more importantly, we plan to hire those who are physically and mentally challenged — or challenged in other ways such as an unplanned pregnancy or a single parent who can only work a few hours a week while her children are in school.”

Karen added, “The fact that people are disabled doesn’t mean they can’t be productive. It means they can be productive only in certain ways. And, if you stop to think about it, isn’t that true of all of us?”

Their new ventures will continue in the Wilder tradition of fresh and unique Maryland cuisines with a local, farm-to-market approach to sourcing.

Equally important, the Wilders are creating a social enterprise — a business that will benefit an underserved “challenged” population by providing jobs, including on-the-job training. It will generate revenues from selling quality food services and reinvest profits back into their jobs and opportunity programs, targeting those who need only a pathway to work to be productive.

As we closed, I was reminded of Doris Lessing, the English writer, who said, “Any person can flourish in hundreds of different ways if only given the opportunity to do so.” Jim was given that opportunity more than 40 years ago, and today he and Karen are on a mission to pass on those opportunities to others.