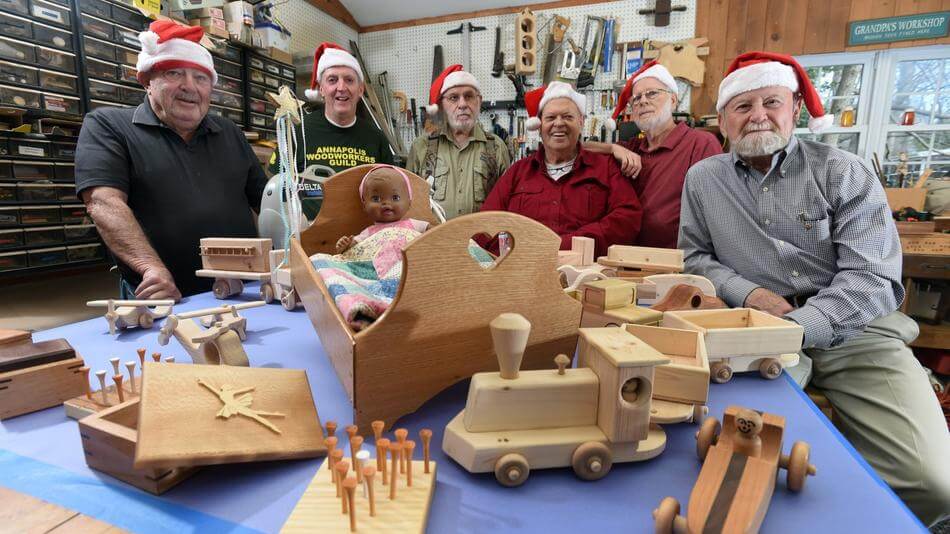 by Phil Burgess, Unabridged from the Life section of the Annapolis Capital, Sunday May 3, 2018

Personal agency. It’s not a common phrase, but it’s a phrase we hear more and more. It’s the underlying theme of recent books such as Peter Korn’s “Why We Make Things: The Education of a Craftsman.”

Personal agency refers to purpose-driven action that has visible consequences. You can paint a fence, repair an automobile, fix a leak in the plumbing, cut and sew a quilt — everything from baking a cake and playing the piano to building a garage or knitting a blanket.

It’s a phrase we hear more and more as we experience it less and less. As our vocations become increasingly compartmentalized — symbolized by the rise of the specialist and the fragmentation of work — many seek the satisfaction of personal agency once found in work but now found in hobbies and pastimes.

Personal agency is the kind of thing we used to learn in shop class — from woodworking and auto mechanics to home economics. How to “turn wood” to make an ash tray or salad bowl. How to take an engine from a junk yard and make it run. But even the shop class has disappeared in most of our schools.

In the words of Matthew Crawford in “Shop Craft as Soul Craft: An Inquiry Into the Value of Work”: “The satisfactions … of manual competence have been known to make a man quiet and easy. They seem to relieve him of the felt need to offer chattering interpretations of himself to vindicate his worth. He can simply point: the building stands, the car now runs … Boasting is what the boy does because he has no real effect on the world … But the (craftsman) must reckon with the infallible judgment of reality, where one’s failures or shortcoming cannot be interpreted away.”

Jobs with personal agency carry with them lots of pride and satisfaction. Those who are builders or craftsman are fully engaged in creative work, not cogs in a machine. And with each passing project — as they get better and they improve — their pride and work satisfaction increases.

Last week, I found myself sitting with seven men whose camaraderie is centered around personal agency. In this case, a stable and purpose-driven lifetime hobby — woodworking — an activity and relationships unrelated to their careers.

It happened when longtime friend Andy Borland invited me to his home to meet some of his woodworking pals. Borland, the retired football coach and athletic director at Severna Park High School, and his wife, Katie, are both heavy-duty volunteers in all aspects of civic life in the Severna Park area.

Borland’s woodworkers — they call themselves The Toy Workshop— meet every Monday at the Borland’s home to make wooden cars, trucks, airplanes, helicopters and doll beds. It doesn’t stop there. They also make whale-shaped crayon holders, bird houses and beehives and also board games such as puzzles, tic-tac-toe and “the last man.”

On the day of my visit, the work began with coffee and fellowship. Seven men showed up between 7:30 and 8 a.m. including Don Ames, 90, a co-founder of the Annapolis Woodworkers Guild.

Others included youngsters such as 67-year-old Paul Dodson as well as 72-year-old Phil Carrol, 78-year-old Jim Jordan, 78-year-old Will Hottle, 80-year-old Bill Carbin and, of course, host Borland, 78. These men, with an average age of 75.5 years, brought more than 450 years of experience with woodworking to the table since most of them caught the woodworker bug well before they were teenagers.

The 2018 goal of The Toy Workshop is to produce 2,000 toys in time for Christmas. That’s when the toymakers gift the toys to area child care centers and to schools for kids at the pre-school, kindergarten and first grade levels — all on behalf of the Annapolis Woodworkers Guild.

Katie — Borland’s wife of 54 years, mother of three adult daughters and, for 28 years, a teacher of English as a second language — is also part of the story. Each Monday she has the coffee brewing as the toymakers stream in.

When they stop their work at 11:30 a.m., they return from the toy workshop to the kitchen table where Katie will have prepared soup and muffins. On the day of my visit, we had chicken chili and cornbread muffins.

In addition to the delightful fellowship and the Borlands’ hospitality, the toymakers assemble at the home because Borland has a first-class woodworking shop, about the size of a two-car garage, complete with a table saw, band saw, scroll saw, drill press, hammers, chisels, sandpaper and all the other tools of the trade of the modern toymaker.

Reflecting discipline which was, undoubtedly, imposed by Katie, the workshop also has a vacuum system that picks most of the sawdust out of the air and, perhaps most important, off the clothes of the men before they re-enter the home for lunch.

The toymakers are all members of the Annapolis Woodworkers Guild. The Toy Workshop is just one of many programs members carry out under the auspices of the guild.

The Annapolis Woodworkers Guild was established in 1989. Its mission is to preserve the tradition, culture and history of woodworking.

Guild meetings include knowledgeable speakers on subjects such as tools and techniques of interest to woodworkers. Meetings are also a time when members can ask questions to advance their own knowledge and skills around working with wood.

Importantly, guild members donate the products of their woodworking activities — furniture, picture frames, lecterns and other items in addition to toys — to churches, schools, and other educational and charitable institutions.

Don Ames, part of the toymakers, is the surviving co-founder of the guild. Born in 1928, he was educated in Luce, Minnesota, in a one-room school house for the first eight grades.

A member of the Greatest Generation — he was in boot camp as World War II wound down — Ames spent 26 years in the Navy as a disbursing clerk, performing paymaster, bookkeeping, auditing and related financial management functions, retiring as a master chief in 1965.

Ames then went to work for Anne Arundel County as a court reporter, a position he held for another 20 years, retiring again in 1985.

When I asked Ames about the origin of the woodworkers guild, he replied, “Well, there were three of us. Our wives started a quilters guild, and that left us stranded for a couple of nights a week. Turns out we all enjoyed woodworking and had been active in the Baltimore Woodworkers Guild, so we decided to start the Annapolis Woodworkers Guild. If a guild is something quilters can do, we decided it’s something woodworkers can do.”

Ames continued, “We reserved a meeting room at the West Street library, put a notice in The Capital and 10 people showed up at our first meeting in October 1989. … Today we have close to 150 members and we meet on the second Thursday of each month at the Davidsonville United Methodist Church.”

Later in the morning, I joined the woodworkers in the toymaking shop. All the machines of the toymakers were buzzing — the table saw cutting large pieces to size, the scroll saw cutting fine pieces to the shape of a helicopter, the drill press punching eyes in wooden whale. Every man knew his job and each was busy performing. Despite the vacuum system, there was the sweet smell of sawdust in the air.

As I wandered about, watching the men working their craft, I was reminded of the words of the popular poet-philosopher, Kahlil Gibran: “Work is love made visible.”

That is surely what these men were displaying: love made visible in every cut of wood and in each swipe of the sandpaper, making a toy that would, before the end of the year, delight a child somewhere in our larger community.