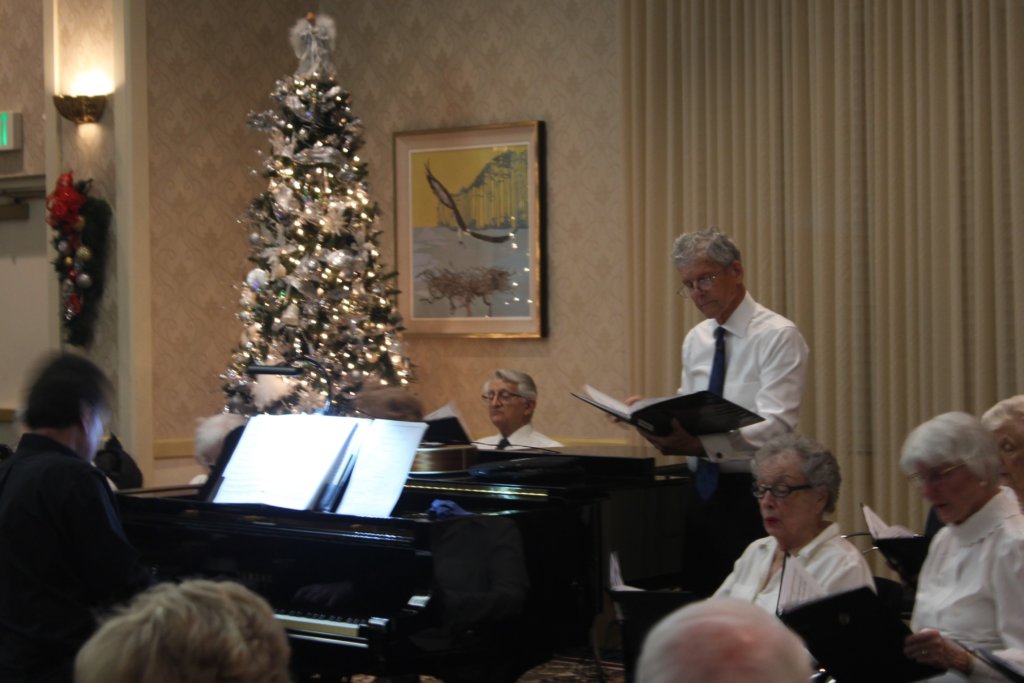 May 26, 2019/Phil Burgess/Comments Off on Some people are evergreens, never dormant, always renewing

by Phil Burgess, Unabridged from the Life section of the Annapolis Capital, Sunday May 26, 2019

Unabridged article from the Life section of the Annapolis Capital, Sunday, May 23, 2019

We’ve all heard of early bloomers, youngsters who perform at adult levels – and late bloomers, who are slow to get off the mark.

These realities only show that different folks blossom in different seasons of their life.

But occasionally, we meet an evergreen, a perennial who is never dormant, forever renewing, forever blooming at every stage of his or her life.

I met an evergreen a few weeks back. His name is Bob Sherer.

I heard about Sherer while visiting friends at Ginger Cove.  They told me about one of their own, a baritone, who recently turned in a solo performance as a vocalist. Even though he’s now in the ninth decade of a very full life, Sherer can still belt out good music – e.g., showtime favorites from My Fair Lady as well as opera snippets from Verdi’s Don Carlo or Gounod’s Faust.

And he can do it with a tuba as well as vocally!

Born in 1938 in Annapolis, Sherer graduated from the US Naval Academy, Class of ’61.  His life-long interest in music led him to join the Chapel choir and the USNA Drum and Bugle Corps, where he advanced to Corps commander.

“During those years,” he said, “the Academy was all men, so when we were slated to perform pieces like Handel’s Messiah, we would recruit female voices from Hood College in Frederick, Maryland.”

Following graduation, Sherer joined the surface warfare fleet where he was an early member of America’s emerging nuclear navy, serving first on the USS Enterprise, the Navy’s first nuclear-powered aircraft carrier, now decommissioned.  He also served on the USS Long Beach, a guided missile cruiser and the world’s first nuclear-powered surface combatant, and he commanded the anti-submarine frigate USS Patterson.

During his 30 years as a Naval officer, Sherer visited 45 nations – including service in the military assistance group at the US embassy in Lisbon, Portugal; two years studying political science as an Olmsted Scholar at the University of Geneva (Switzerland); and four years commanding the NROTC unit at MIT, his last active duty post.

So, what does a well-traveled, broadly experienced and tri-lingual evergreen do at age 53?  Though fluent in Portuguese and French, Sherer went back to school, earning an MA degree in French language and literature from Boston University as he fired up a second career teaching middle and high school French in Poughkeepsie, NY.

Sherer refected, “By now, I’m a retired Naval officer, pushing age 54, and having to take orders from educators 20 years younger and to deal with parents as well as my young students. It was a bit like a cold shower.  But I learned, and the experience was a great one.  I found teaching to be very rewarding.”

Sherer’s second career as a teacher ended in 2004 when he and Diane, his late wife of 50 years, moved from Poughkeepsie to Annapolis, becoming residents at Ginger Cove, the Annapolis continuing care retirement community.

It was at Ginger Cove that Sherer launched his third career as a volunteer – or perhaps better, as servant leader.

When his wife became ill in 2007, Sherer became deeply involved as a caregiver until her passing in 2011.  He emerged from that experience with intimate and practical knowledge of the transition from independent living to nursing care, including the overall operations of the health center.

Sherer increasingly participated in – and contributed to – the life of Ginger Cove.  As a member of the Residents Club, Sherer began to chair committees such as building and grounds, energy and the environment, budget and finance and others.  During this time, he also served as Residents Club president (2015-16).

Sherer’s interests, however, were not limited to governance.  He also chaired the trip committee (2009-14).  Today Ginger Cove residents can choose from more than 100 trips a year – including a wide range of theater, musical productions, and museum trips – trips planned and orchestrated by Sherer, including transportation and tickets for as many as 30 shows a year.

Indeed, Sherer’s first love since the Navy is music, and music takes up much of his time these days.

Sherer serves as the music coordinator for the weekly Ginger Cove Episcopal Service and the Catholic Mass every other week.  He also coordinated equipping the auditorium organ with a digital interface and arranged for recording more than 90 hymns and other organ music.

Sherer recently gave residents a solo concert featuring a wide range of vocal selections from the Bach-Gounod Ave Maria to the Robert Goulet hit, If Ever I Should Leave You.

I also discovered that Sherer’s volunteer work does not end with Ginger Cove.  According to Doug Hayman, current residents club president, “Bob Sherer has made significant contributions to the wider Annapolis community – including the Bay Winds Band, Renaissance Singers, and St. Anne’s Church [and his] energy and commitment to enhancing our community life.”

As Bob Sherer and I parted, I thought: Inside this calm, cool and collected man of great character and courtesy is an energizer bunny.  You can’t see the bunny, but after 15 minutes with this man you know it’s there.

Polymath, philosopher and Nobel Laureate Albert Schweitzer once told a graduating class, “The only ones among you who will be really happy are those who have sought and found how to serve.”  By that standard, there’s a good chance Bob Sherer is a “really happy” man – and no chance that he will rust out wondering what later life is all about.