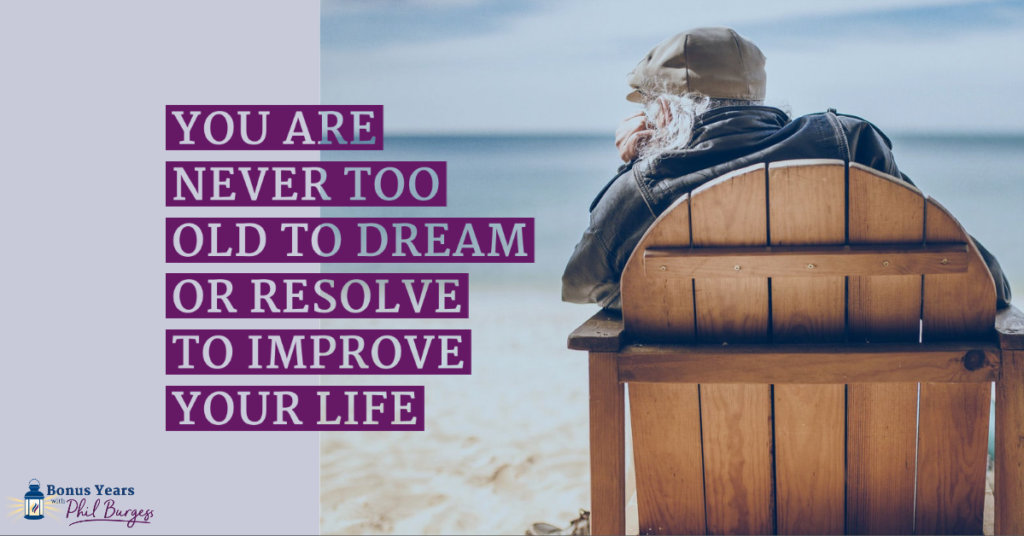 December 31, 2017/Phil Burgess/Comments Off on You are never too old to dream or resolve to improve your life

by Phil Burgess, Unabridged from the Life section of the Annapolis Capital, Sunday December 31, 2017

As we celebrate New Year’s Eve, we should remember that “Tomorrow is the first blank page of a 365-page book” and our calling to “Write a good one.”

Those are the words of modern American philosopher Brad Paisley — also a Grammy-award-winning country music singer-songwriter, the vocation of some of our most insightful contemporary philosophers.

The opportunity presented by the new year applies equally to all, regardless of gender, religion, race or age — including those in their bonus years. In words attributed to C.S. Lewis, “You are never too old to set another goal or to dream a new dream.”

Enter the New Year’s resolution. Bing Crosby, another important philosopher from the ranks of entertainment, put it this way in his song, “Ac-Cent-Tchu-Ate the Positive”: “You’ve got to accentuate the positive. Eliminate the negative. Latch on to the affirmative. Don’t mess with Mister In-Between.”

Among the most common resolutions, according to those who study these things, are examples of accentuating the positive and eliminating the negative.

The most common in the category of “eliminating the negative” tend to be more prevalent among the younger adults than those in their bonus years. Theses include vows to:

Quit smoking. This one is becoming less common as culture increasingly frowns on those who smoke. Besides, chances are that those well into their bonus years have never smoked or quit a long time ago. Longevity and smoking don’t do well together.

Drink less alcohol. This resolution often comes after a season of heavy imbibing that typically begins with the office party and continues with other work-related holiday events, culminating with the Dec. 31 celebration to bring in the new year. Fortunately, most in their bonus years face fewer temptations in this area.

Spend less time on social media. This is a new one, reflecting the widespread use of Facebook, Instagram, Twitter, Pinterest, WhatsApp, Snapchat, Skype, etc. Social media use among those in their bonus years is largely focused on Facebook and texting via its Messenger. Though social media is often over-used by teens and young adults, for many in their bonus years — especially those with limited mobility — Facebook and texting are useful antidotes to isolation and loneliness. By using Facebook, many are able to participate in frequent two-way conversations with family members and especially grandchildren and their activities.

Then there are the resolutions to “accentuate the positive” — including vows to:

Get organized. While this resolution ranks high among young adults, it is much less common among most in their bonus years, most of whom are living more manageable lives and many of whom have already downsized, which is the most drastic (and painful) approach to getting organized.

Resurrect a relationship. Strong relationships — and especially social engagement in face-to-face relationships — are the best predictor of successful aging. Some relationships with friends and family and even casual relationships formed around paid or volunteer work or even an exercise class are maintained and even enriched by letters, emails and telephone calls. Many use social media — texting and Facebook, for example — to maintain and enrich relationships.

The New Year’s resolution is also a good time to mend troubled, broken or elapsed relationships in the extended family or with (former) friends. Sometimes it is by letter or email, offering an apology or burying the hatchet. Sometimes by having a cup of coffee or sharing a meal. As one wag put it, “All relationships go through hell. Real relationships get through it.”

Another noted: “A true friendship is between two imperfect people refusing to give up on each other.”

Volunteer. This resolution is tailor-made for many in their bonus years. Most have the time — or can find it — and have tried-and-tested skills and experience that can be valuable to a business, school, nonprofit or neighborhood. By volunteering, they can bring many benefits to community organizations and they can receive benefits — including opportunities to engage with others, solve problems, provide extra hands, mentor younger people, and keep up with a changing world by being out and about and experiencing those changes first-hand as well as through the eyes of others.

Travel. Though some traveled a lot in their working years, many more did not — and even among those who did, many have favored places where they want to revisit. For almost everyone, travel is an eye-opening, enriching experience that expands your horizons, reduces stress, involves social engagement and makes memories that can be cherished as much as they are shared with others.

Eat healthier. This is often the positive side of the resolution to “lose weight.” How many times have you resolved to focus on a healthier diet? No more fast foods. More home-cooked meals. No more junk food. More fruits and veggies. This would be easy if someone could make green veggies smell and taste as good as fried bacon.

The new culprit to healthy eating is sugar. Now eating healthier, for many, means eliminating most white foods — such as white bread, potatoes, rice and pasta — and sugary foods such as cereal, pastries and desserts. This approach may help you lose weight and, another advantage, reduce pain. That’s good, but it might also make it harder to achieve another resolution — e.g., improve relationships — as you drain a lot of the joy of eating out of your life. “I eat cake,” someone once said, “because I know it’s someone’s birthday, somewhere.”

Exercise more. This is also on the positive side of the resolution to “lose weight” — especially after several weeks of eggnog at Christmas parties, cookies and milk with the grandchildren, a Christmas feast followed by junk food that nearly always accompanies TV football. Executing this resolution will mean joining a fitness center or investing in some weights or other home-workout paraphernalia either to bulk up or shed weight. Whether it’s going to the gym, running, a sport or yoga, the promise is a happier and healthier life — both mentally and physically.

Spend less/save more. Money problems are real for almost everyone — and a cause of great stress for many. That’s especially true this time of year after splurging on Christmas gifts, especially for grandchildren. The trick to spending smarter? Plan, budget and look for ways to cut your expenses before assuming you can increase your income.

Dave Ramsey, the personal finance guru, says, “Don’t buy things you can’t afford with money you don’t have to impress people you don’t like.”

Learn something new. This is the time of year when many commit to learning a new skill such as a language or a new sport — think pickleball for those in their bonus years — or a new area of study.

Others focus on a performing art such as acting or singing in a choir like the over-55 Encore Chorale here in Anne Arundel County. Still, others choose learning to cook or knit, woodworking or something artistic such as drawing, painting or photography.

Because many rely on the church or the community college to learn these new skills and topics, there is the added benefit of social engagement.

Whether it’s fitness, learning a new skill or travel, Jeanne Kelly, the founder and director of the Encore Chorale for seniors, said it best: “You’re never too old to try something new or resurrect and perfect a talent you may have closeted.”