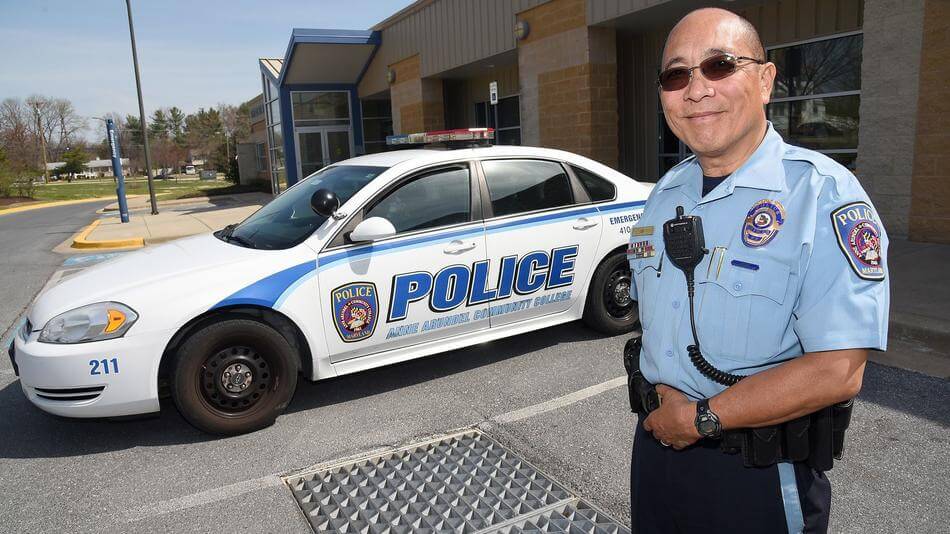 by Phil Burgess, Unabridged from the Life section of the Annapolis Capital, Sunday April 15, 2018

(Image: Dung Dinh Do is a police officer at Anne Anne Arundel Community College. He graduated from the police academy at age 64, the oldest person to ever go through the academy. [Paul W. Gillespie / Capital Gazette])

It shouldn’t be surprising that immigration is all over the news. After all, global migration is one of the megatrends of our time, and the United States is a major “receiving” country.

The contributions of immigrants to the American way of life are enormous. For example, according to the Center for American Entrepreneurship, 43 percent of Fortune 500 companies in 2017 were founded by an immigrant or the child of an immigrant — including many recent arrivals such as Apple founder Steve Jobs, the son of a Syrian immigrant; a Google founder Sergey Brin, born in Russia; and a Netflix founder Marc Randolph, the son of an Austrian immigrant.

However, many would argue the most enduring contributions are those by hard-working immigrant families whose core values and day-to-day performances on the job and in their communities reflect what is best about the American Dream — especially the “up-by-the-bootstraps” theme that describes the upward mobility experience of many American families.

One of those immigrant families is headed by Annapolitan Dung Dinh Do (pronounced “Zung Din Dough”), an immigrant from Vietnam. Even though Do, age 68, is now in his bonus years, he continues to work in public safety after educating his children; sometimes working two jobs; paying income taxes, property taxes and Social Security taxes; and contributing to his church and community through volunteer work.

Do was born in 1950 in Hanoi, the capital of Vietnam. Shortly after the defeat of the French at Dien Bien Phu in 1954, leading to the North/South division of Vietnam, Do’s father moved his family south to Saigon, the capital of South Vietnam, to escape Communist rule in North Vietnam.

In 1967, his parents again emigrated, this time to the U.S. After making their way to Annapolis, his father, Loc Do, and mother, the late Phuong Do, established the popular Oriental Gardens restaurant in Parole’s Forest Plaza in 1970.

However, Do, then age 16, decided to stay in Saigon to join the army of South Vietnam as the Vietnam War intensified. During his five years in the military, Do was twice wounded, the second resulting in a medical discharge in 1971.

Upon leaving the army, the young Do then made his way to America to rejoin his family. Arriving in Annapolis in 1974, Do went to work as a computer programmer, having learned to speak English as a teenager, when he first dreamed of emigrating to the U.S.

Do made one last trip to Saigon in spring 1975, when, he said, “I knew things were going badly with the war. I could see the fear on the faces of Vietnamese soldiers on the nightly TV news. So, on April 6, 1975, I returned to Saigon to escort my fiancee and now my wife, Dzung Do, back to Annapolis — along with her six brothers and three sisters, one only 18 months old.”

Do continued, “We departed on April 28 — just in the nick of time. Civilian and commercial flights out of Saigon’s Tan Son Nhut airport had already been stopped on April 20, so we left on a military flight, a USAF C-130. Ours was the last flight to leave before the airport was closed due to rocket shelling by the advancing communist forces.”

Dung Dinh Do is a police officer at Anne Anne Arundel Community College. He graduated from the police academy at age 64, the oldest person to ever go through the academy. (Paul W. Gillespie / Capital Gazette)
In 1987, Do left his computer job to go to work at Oriental Gardens, taking over the family business until it closed in 1995, when the landlord wouldn’t renew the lease. After that, Do went to work for a mortgage banking firm in McLean, Virginia.

When that job disappeared with the real estate crash of 2008, Do took on two jobs, including one as a security officer for Anne Arundel Community College. In 2013, AACC was authorized to form a police unit dedicated to the college, so out of 30 applicants, Do was accepted to become a police cadet at the Anne Arundel County Police Academy, becoming a sworn police officer in October 2014, following more than seven months of training, making Do the academy’s oldest-ever graduate.

Do said, “The Anne Arundel County Police Academy delivers outstanding but very demanding training. Out of the four selected for the AACC police unit, only two of us graduated. We learned so much. If the average citizen could see what we are taught and how we are expected to carry out our mission to protect and serve, I think there would be a lot more community respect for uniformed police.”

Do talked a lot about his experience as a police officer.

“We’re a thin blue line, but I love my work. It’s such an honor to wear the badge and take care of the college and its students and faculty. As long as I’m healthy, I want to work. In my present job, I must be healthy. I have to qualify with a firearm. I have to be able to do my patrols — sometimes on foot and sometimes on a bicycle. Thankfully, my job keeps me healthy because my daily patrols provide a lot of exercise.”

“Plus,” he added, “My job means I’m engaged on a daily basis with students and faculty and, most importantly, the other cops. They depend on me if there’s a problem just as I depend on them. My job keeps me in a community with a lot of camaraderie. That helps me to stay alert, keep healthy and find ways to make the college community safer and more enjoyable.”

Do is also an impressive family man. Altogether, he and Dzung, his wife of 43 years, raised 12 children — three of their own in addition to Dzung’s nine siblings. Now working adults, seven continue to live in the Maryland and Northern Virginia area, one in Denver, Colorado and four in California.

In addition, Do has two brothers in Maryland and three sisters out of state. He still dines with his father at least once a month, and he and Dzung get together from time to time with 40 to 50 family members and others in the local Vietnamese community.

“Our children speak Vietnamese as well as English, but they are American through and through. And we’re all Christians. Though I arrived in America as a Buddhist, I converted to Christianity in 1980, and my wife converted in 1985. Our children were raised as Christians and we are regulars at the Annapolis Evangelical Presbyterian Church, where I’ve served as a deacon.”

Do is involved in the community, especially through the church. One of his most memorable projects was a mission trip to Louisiana after Hurricane Katrina.

“While I was there,” he said, “I saw hundreds of young Americans running soup kitchens and giving aid and comfort to flood victims. It was a tremendous experience to see the outreach and caregiving.”

Do continued, “You know, in my job you’re always on the lookout for bad things, but everyplace I go I see people doing good things, especially young people — like I saw after Katrina and like I see every day at the college. I have great hope for the future of our country. We will do fine.”

In these days marked by school shootings, a nuclear stand-off in the Pacific, the use of poison gas in the Middle East and polarization in our national politics, it’s refreshing for those of us born here to look at our nation and its prospects through the eyes of one born elsewhere, one who is here by choice.

It is also refreshing to spend time with someone who finds joy in life through camaraderie and by continuing to be productive and making a contribution to family and society, even in his bonus years.