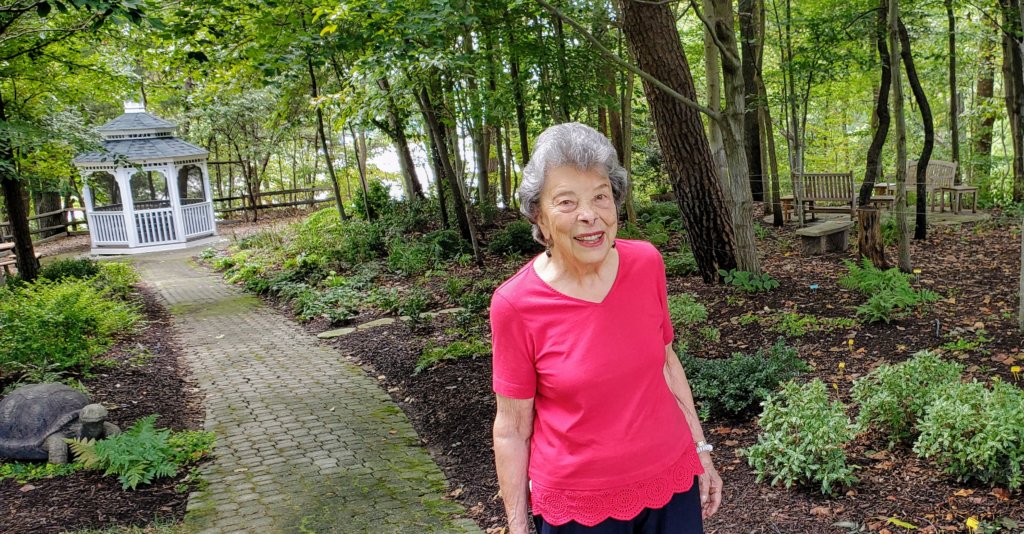 by Phil Burgess, Unabridged from the Life section of the Annapolis Capital, Sunday September 15, 2019

by Phil Burgess, Unabridged from the Life section of the Annapolis Capital, Sunday, September 15, 2019

“Sublime” is not a word I use very often.  In fact, I don’t think I’ve ever used it.  And a Google graphic tells me I’m not alone because it shows that use of the word sublime has seriously declined since 1800.

When I read it, usually in an old poem, I often need to look it up – to see what meaning the author is likely intending.

But last week, for the first time in my life, that word came to mind spontaneously as I visited Woodland Gardens at Ginger Cove.

This time, when I returned home, I looked up sublime to find out what thoughts and emotions were being sparked by my experience with this hidden treasure in the backyard of an iconic location in Annapolis.

I found it – a definition of sublime that fits perfectly the experience I was having: “Of very great excellence or beauty, so much as to inspire great admiration or awe.”

“That’s it,” I thought to myself.  That defines the experience of a visit to Woodland Gardens at Ginger Cove.

I have been to Ginger Cove many times over the years to visit friends, have dinner or attend a birthday party.  I have always admired the lovely landscaping, one of many attractive physical attributes of one of the region’s premier continuing care retirement communities.

This time, however, I was there to interview Carolyn Gorsuch, age 94, a former high school math teacher and now a gardener who has played other roles at Ginger Cove, including bridge.

I’ve been hearing about Gorsuch for months from friends and from readers who have said, “You’ve got to do the story of Carolyn Gorsuch.”

So, following a call, we agreed to meet in the Woodland Gardens.

I arrived early and found my way to the Gardens.  I saw a woman working some flowers. “Are you Carolyn Gorsuch?” I asked.

“Oh, no,” she said. “But I’m going back to my apartment, so I’ll stop by hers and tell her you are waiting.”

I waited a few minutes.  I was alone.  Seated on a comfortable teak bench, I looked out over the gardens.  They were so beautiful – hydrangeas, azaleas, rhododendrons, astilbe, tiarellas, hostas, ferns – and the setting so peaceful.  When I looked down the hillside and through the trees, I could see Gingerville Creek, which empties into South River.

Off in the distance I could see a gazebo with a teak table and benches.  Over to the side were slate patios just large enough for a couple of people to sit and talk or just enjoy the peace of the surroundings – and, of course, fencing to deter deer who must see the gardens as a huge smorgasbord.

About that time, I saw a woman with a lively step and colorful attire walking down the path.  I rose and asked, “Are you Carolyn Gorsuch?”

“Yes,” she said.  “I see you found your way to Woodland Gardens.”

I said, “So good to meet you.  I have heard so much about you and Woodland Gardens. I arrived early which has helped me understand why people so appreciate these gardens and are so full of compliments for the work you have done to make all this possible.”

Gorsuch quickly corrected me.  “I’m just the latest in a line of residents who have brought new life to these banks on Gingerville Creek.”

Handing me a brief history of the gardens by resident Judith Poirer, Gorsuch explained that residents Junie Clark and his wife Mary Jane moved into Ginger Cove in 1993.  The area behind their unit was full of vines, brush and weeds.  The following spring, Clark and his caretaker cleared out the area, where they planted daffodils, azaleas and other shade-loving shrubs.

She continued, “He also planted a young Magnolia tree. There it is – tall, proud and healthy – located on the path to the dock.”

Clark expanded and improved the gardens every year, but in 2006, as his health declined, he was unable to give the gardens the attention they required.  By 2007, it was hard to find the daffodils among the weeds and brush that were reclaiming the area.

“My involvement didn’t begin until early 2008, when the president of the resident’s club asked me, Shelly Henderson and Ralph Graber to be curators of Woodland Gardens, including restoration of the Sisters Garden started by Kay McCartor and Marcia Owens 15 years earlier.

Gorsuch continued, “Working together with resident volunteers – and with South River Association Riverkeeper, Diana Muller, to stop severe erosion – over the past 11 years, we’ve expanded the Gardens to include a newly designed Sisters Garden, the gazebo, sitting patios,  more than a half-acre of plantings and a rain garden, all of which have also stopped the erosion.”

One thing is clear: Woodland Gardens enjoy attentive and effective leadership as the resident curators meet weekly over dinner to monitor ongoing needs and progress.  The volunteer curators also work hard year-round to do the planting, trimming, weeding and spraying – with the help of resident volunteers when extra manpower is needed, including support from Ginger Cove management.

The results are impressive. Every October, resident volunteers plant 600 new bulbs – both daffodils and Spanish bluebells.

According to Gorsuch, “In February, hundreds of Lenten roses, a perennial, start blooming and carry their blooms throughout the summer.  In April, the center daffodil garden forms an amazing cloud of yellow, when thousands of daffodils are in bloom.  After they fade, the whole garden turns blue as the Spanish bluebells open.”

I’ve been to Longwood Gardens and meadows in Pennsylvania. and to Kew Gardens in London, England as well as the Botanical Gardens in Washington, D.C. and Sydney, Australia.  Each is stunning.  But Woodland Gardens at Ginger Cove are just another example that small is beautiful – and that gardening is love made visible.

Moreover, Gorsuch and the other volunteers are just another example of how a few people can made a big difference, at any age.

As I was driving away, I remembered my mother’s warning to me when I was just a teenager: “Don’t get carried away by feelings of love at first sight.”  I took that admonition to heart back then.  But my mom never met Carolyn Gorsuch or experienced Woodland Gardens on a lazy summer afternoon.