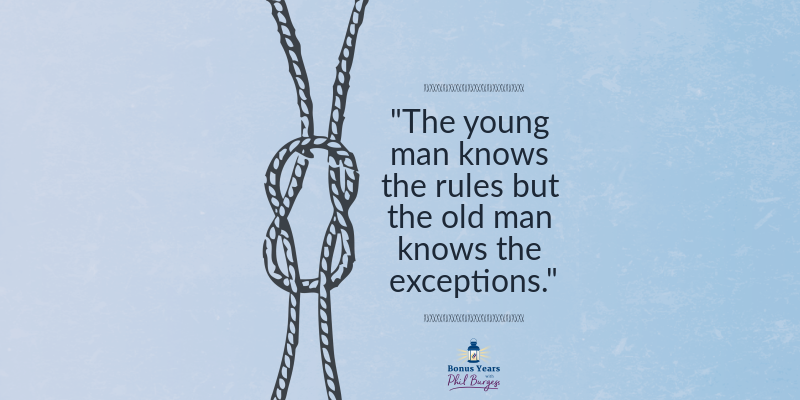 In business and life, you learn the ropes by untying the knots

November 2, 2014/Phil Burgess/Comments Off on In business and life, you learn the ropes by untying the knots

by Phil Burgess, Unabridged from the Life section of the Annapolis Capital, Sunday November 2, 2014

Let’s talk about relevance and entrepreneurship.

First, relevance. When you reach your bonus years, you are at the top of your game — with lots of wisdom and many skills. But there’s often a problem. In the words of Laurence J. Peter, author of “The Peter Principle,” “Old age is when you know all the answers, but nobody asks you any questions.” But not always, as you will see.

Second, entrepreneurship. “Entrepreneurs are people who follow their passion without regard for resource constraints” — my favorite definition of those risk-takers and job-creators who occupy a high place in the pantheon of American heroes.

Today’s story is about one of those heroes. Her name is Jennifer Politte. She is the young entrepreneur who sought the advice and counsel of a wise bonus years executive.

Born in Missouri and raised in Baltimore, Politte earned a degree in dance at Towson University in 1994. She went on to dance professionally in productions in Baltimore and elsewhere on the East Coast.

“I have always been interested in how our bodies work and how we maintain our health and especially our mobility and flexibility.”

“Massage therapy was great training. … But I missed the movement part. That’s when I realized that it’s the movement of the body that really interests me.”

About that time, she discovered Pilates, the physical fitness system developed in the early 20th century by German-born Joseph Pilates. Pilates’ idea was to use mind and body together to achieve physical strength, mental focus and overall balance.

In 2003, Politte became a Pilates believer and practitioner.

But learning and practicing were not enough. She wanted to teach.

So in 2004, Politte enrolled in Pilates teacher training, first in Washington and then at the Boulder, Colorado, Pilates Center, considered by many to be “the Harvard of Pilates schools.” She completed her master’s and was certified not only to teach Pilates but also to serve as a “host adviser,” mentoring aspiring teachers seeking the center’s certification.

Armed with new knowledge and skills, Politte and her husband of nearly 11 years, Chris, decided to invest in a Pilates studio.

Finding a facility to renovate was only the beginning. As Politte told me, “Business is not my calling. My calling is to teach Pilates. I didn’t know how to do a business plan. Neither my husband nor I knew how to raise capital, deal with the bank or negotiate with the U.S. Small Business Administration.”

Still, her passion to teach required her to create and build a business. In terms of resources — people, money, space, equipment and information — she had nailed down the space. She had the substantive know-how and certification to teach.

But she did not have the other resources she would need, such as the accountants and other skilled people; specialized equipment unique to a Pilates studio; money to acquire these other resources.

Despite the odds, on June 25, 2014, the Arnold Chamber of Commerce hosted a ribbon-cutting event to honor the opening of Pilates on the Bay, located on Baltimore Annapolis Boulevard, next to the Severna Park Lower School.

According to Politte, “We broke even the first two months. We made a profit in September. I am so pleased with how well things are going. I spend 25-30 hours a week teaching. I spend another 15-20 hours a week managing the business — planning, marketing, accounting and maintaining the equipment.”

Pretty good for someone who knows nothing about business. Politte said, “This business wouldn’t exist without Ray Robertson and SCORE.”

Politte told me she how she called SCORE and asked for help in planning and launching her business. SCORE gave the case to Robertson, a retired senior executive from Verizon. With more than 80 circumnavigations of the sun to his credit, he is a fount of wisdom surrounded by empathy and resolve.

Politte explained, “Ray’s questions forced us to look at the time requirements, family impacts and other realities of running a business. … It was like a Marine Corps boot camp. He was a joy to work with but he was determined that we get it right the first time.”

When I talked to Robertson about his experience with Politte, he said, “Look, you learn the ropes in business by untying the knots — just like in life itself.”

As I talked to Politte about her experience with her mentor, she said, “Ray still checks in on me. ‘How you doing,’ he will say, and we’ll talk about joys and jolts in running a business. Ray and SCORE are the best. They don’t just help and disappear. They stay connected.”

Justice Oliver Wendell Holmes once observed that “The young man knows the rules but the old man knows the exceptions.” I knew in an instant that Politte had learned the ropes — and the knots — from a wise and generous mentor who has a new legacy on Baltimore Annapolis Boulevard.