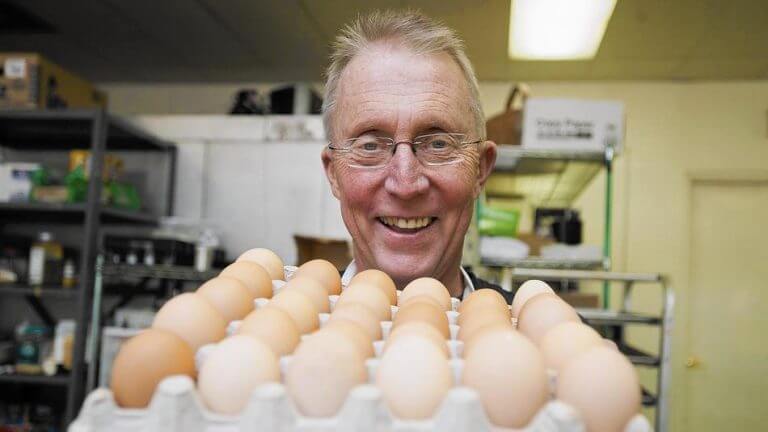 From Harvard to Annapolis and A Cook’s Cafe

by Phil Burgess, Unabridged from the Life section of the Annapolis Capital, Sunday April 22, 2017

Have you ever been to a farm-to-table restaurant? You can answer “yes” if you have been to A Cook’s Cafe, located at 911 Commerce St. across Bestgate Road from Westfield Annapolis mall.

If you have not, you should go there for lunch just to taste garden-fresh salads and kitchen-made sandwiches and soup — or the full-blown take-home dinners, such as hydroponic bibb lettuce salad, honey glazed chicken, spring vegetable and quinoa pilaf, ending up with lemon cheesecake.

The cook at A Cook’s Cafe is a calm, self-assured man in his bonus years named Craig Sewell. Armed with a degree in economics from Harvard University, he is a fascinating and inspiring man of many achievements that have little to do with economics or Harvard. In fact, he began his career as a professional cook and restaurateur as soon as he removed his cap and gown in 1973.

Now pushing his mid-60s, this one-time Indiana state swimming champion is still a picture of good health and high energy. He continues a daily 1-mile swim at the YMCA in Arnold and, in his younger days, completed four marathons, including the Marine Corps Marathon and the New York City Marathon.

Sewell is a man on a mission: to advance the farm-to-table movement, including the growth of farmers markets, the wider use of locally grown food in restaurants, the revitalization of public places, and the expansion of interest and skills in home cooking, including both men and women.

When I first met Sewell in 2012 and wrote about him in this space, he told me of his passion for promoting locally sourced foods — adding “I will never retire.”

That’s why I was astonished a week or so ago when I received a broadcast email from Sewell announcing that “after 15 years of catering, cooking classes, take-home dinners, local food sourcing, I believe it is time to have a new owner step into my role at the Cafe.”

Selling the Cafe. That took me by surprise. How would I find a substitute for one of my favorite Craig Sewell lunches — caramelized tomato soup and a sandwich called Goody Two Shoes, including cream cheese, walnuts, avocado, tomato and sprouts served on multigrain bread?

And what about his “I will never retire” lyric from our 2012 conversation?

(Click here to read the rest of the story)