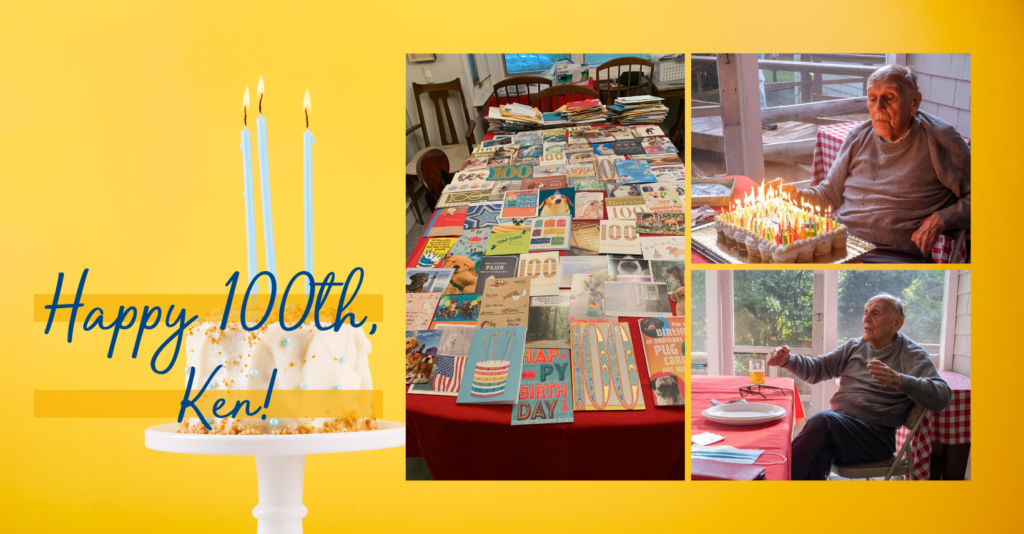 At age 100, Annapolitan centenarian is still using his gifts

July 12, 2020/Phil Burgess/Comments Off on At age 100, Annapolitan centenarian is still using his gifts

by Phil Burgess, Unabridged from the Life section of the Annapolis Capital, Sunday July 12, 2020

Two weeks ago, on June 26, 2020, the Annapolis area did its part, when Ken Nagler of Edgewater, a Bonus Years subject from yesteryear, celebrated his 100th birthday.

Kenneth Nagler was born in Longmeadow, Massachusetts in 1920, the son of first-generation German immigrants.

He attended what is now called the University of Massachusetts in Amherst, but the 1941 attack on Pearl Harbor occurred in the middle of his senior year.  Like so many of the Greatest Generation, when he graduated he joined the military, where his course work in the sciences led him to become a Navy meteorologist.

Nagler’s wartime service was the beginning of an uber interesting career, much of it in senior positions, as a weather specialist.

After the war, Nagler went to Utah and Nevada where he developed a nuclear fallout prediction method that was used in planning and executing all subsequent US nuclear tests, including those in the Marshall Island atolls of Eniwetok and Bikini in the Western Pacific.

In 1947, Nagler returned to the University of Chicago, where he earned a master’s degree and met Nan, his wife of 70 years.

After completing their university work, also in 1947, the Naglers moved to the Washington, D.C. area where Ken and Nan had three girls: Betty, Janet and Sue.

Though Betty Smith lives in Winfield, Illinois, the other two daughters live nearby in Maryland – Janet Nagler in Silver Spring and Sue Beatty in Edgewater.  In fact, daughter Sue lives next door to Ken’s Edgewater home.

Washington is also where Nagler continued his career with the U.S. Weather Service, where he:

Talking with Nagler, I discovered he was typically among the last to brief the astronauts before their launch, often conducting a final weather brief while riding with the astronaut to the launch pad.

Nagler personally viewed more than 30 launches from May 1961 to December 1972. Testimony to his personal relationships with nearly every astronaut during that period is found in personal notes and inscribed photographs that Nagler has saved over the years.

When he “retired,” Nagler didn’t head for the golf course. “I played golf a couple of times.  But I gave it up after achieving a par on a par-three hole.  Since par is the goal in the game, and I succeeded, I never had to play golf again.”

Nagler retains a great sense of humor that finds its way into almost every conversation – multiple times, depending on how long you go.

His golf story is also symptomatic of the new chapters in his life, where he can be found seeking new challenges and new horizons.  During his second 30 years, his bonus years, Nagler took up new and difficult projects, each in the context of long-standing passions: animals, travel, and writing.

Nagler’s autobiography is also a place where he flashes his talent in rhyme and meter, concluding his life’s story with:

Good stuff, though, given his birthday, a revision is now required.  The second half should read,

“Now at one hundred, still alive…
I guess I’ll aim for one-o-five.

Nagler’s wonderful story is framed by his love of family, his talent for prose, and his passion for science, nature and animals of all kinds – but especially dogs – and three loving and caring daughters and an adult grandson.

All three daughters joined to create a special 100th birthday party – with Betty on Zoom from Illinois. According to Sue, who lives next door and looks in on her dad every day, “It was a wonderful and memorable celebration.  He has received 350 birthday cards so far.”

She added, “He has enjoyed reading them all – and he remembers most of the senders.  As you know, he was a very popular American Kennel Club judge for many years, so many of the cards come from AKC people who met him 50+ years ago.”

When people talk about “the good life”, I often think of Ken Nagler and his many blessings, not the least his upbeat spirit and the productive and satisfying bonus years where chapters of his life are still being written.