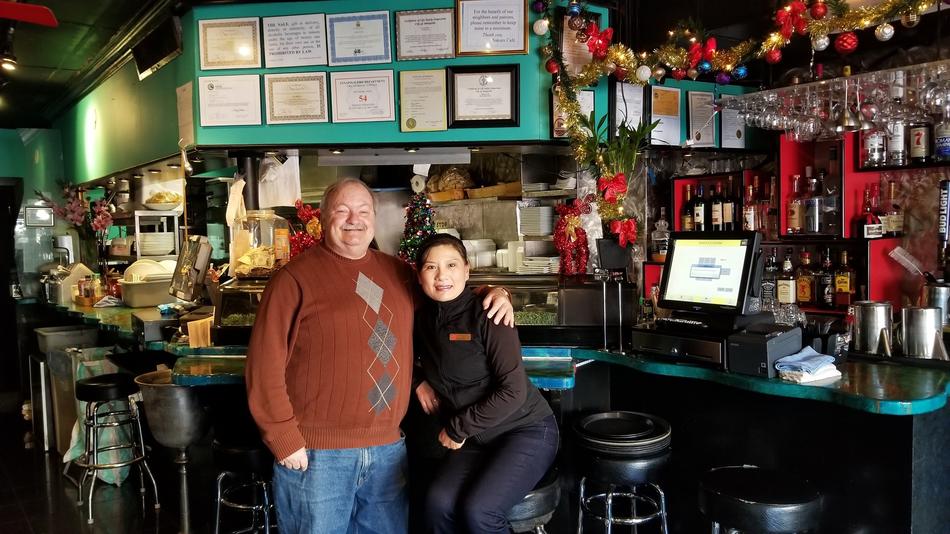 Annapolis man turns his setbacks into a comeback

December 18, 2018/Phil Burgess/Comments Off on Annapolis man turns his setbacks into a comeback

by Phil Burgess, Unabridged from the Life section of the Annapolis Capital, Sunday December 18, 2018

Unabridged article from the Life section of the Annapolis Capital, Sunday, December 14, 2018

Like many others that brisk Monday morning, Rice dropped a contribution into the kettle. As I said, “Thanks a lot, sir…and Merry Christmas,” I noticed Rice paused, apparently preoccupied. After a few seconds, he looked up and said, “I give monthly to the SA, but I will always double down when I have the opportunity.”

Rice, age 64, looked me in the eye and declared with a big smile on his face, “I would not be here today if it weren’t for the Salvation Army. I’ve gone through some rough patches in my life – some very rough patches. Each time, the Salvation Army was there with the helping hand I needed to get through the weeds.”

The Salvation Army – founded in East London in 1865 by Methodist evangelist William Booth and his wife Catherine – was established to supplement preaching by offering practical help to the poor and destitute by meeting both their “physical and spiritual needs.”

To advance its mission in more than 130 countries, the SA runs charity shops, operates shelters for the homeless, and provides disaster relief and other kinds of humanitarian aid where it’s needed.

In our family, we’ve always viewed the SA as an organization personifying the assertion from ancient Scriptures that “faith without deeds is no faith at all.” Hence, I was keen to learn more about Rice’s personal experience with the practical and humanitarian work of this important and respected international organization.

I started asking questions, but Rice told me he was on his way to work – at the Sakura Café, across the way on Main Street. With a menu of Chinese, Thai, Japanese and American items Sakura offers both carry-out and delivery services. Rice’s job includes the delivery part; he was just returning from delivering a luncheon order to a downtown office.

With another order waiting to be delivered, we decided to meet on Tuesday at the Sakura to talk more about the role of the Salvation Army in the life of Steve Rice.

When I showed up at the Café on Tuesday, Rice was out on a delivery. But he soon returned, and we spent a lot of time talking while I nibbled on sushi and sipped tea.

When I asked him how the Salvation Army had changed his life, Rice told me a story of his lifelong struggle with alcoholism.

Rice was born and raised in Cumberland, Maryland. Once he graduated from Allegheny High School in 1972, he attended Frostburg College where, after several interruptions to work, he graduated in 1983 with a psychology major and a chemistry minor.

During this period, Rice married, but the marriage didn’t last.

“After a couple of years, my wife and I separated, leaving me as a single father to raise a 14-months-old infant boy. My son is now an adult, age 40 – and I’m proud of his achievements. After graduating Chestertown high school, he served in the Army and is now operations manager for an Eastern Shore defense contractor. He’s also married and the father of my three grandchildren.”

“These were tough years. I was an alcoholic, but I refused to admit it. I know that was a factor in my divorce, but it was an ever-growing problem in my work. I had good jobs – in textiles research; as a technical manager at Scripto, the lead and eraser writing company in Atlanta; and as a Maryland state real estate officer in Chestertown. But I lost each one as I struggled with alcoholism.”

In 1983, Rice returned to Annapolis where he worked in hotels as a front desk clerk. Even though he was punching way below his weight on the job front, he lost even those jobs as he received the first of a series of DUIs – driving under the influence of alcohol.

Rice explained, “The judge up in Allegany County took my driver’s license, imposed a fine and sentenced me to 200 hours of community service with the Salvation Army.”

Wearing a big smile, Rice continued, “It was the best thing that could have happened to me. I had lots of jobs at SA, but the one I liked best was cleaning the sanctuary, in part because it gave me quiet time to renew my relationship with God.”

In fact, his work experience at the SA was so meaningful that he continued volunteering there even after he had served his sentence from the court.
Rice said, “The Salvation Army showed me the way. That’s where I began to feel useful. No money because I volunteered, but I felt useful – and I had a purpose every day.”

“The judge also ordered me to attend Alcoholics Anonymous. That was another blessing because it placed me in an environment – of mutual aid and fellowship – that made me address the spiritual as well as the physical issues of my alcoholism.”

Rice opened up, explaining, “It took me a long time to get control of my life. Alcohol had destroyed my vocational life. It was a factor in the collapse of my marriage and was destroying my other relationships. Alcohol made me an incompetent human being. Had it not been for that judge forcing me to serve as a volunteer at SA and to attend AA, I would still be lost.”

Today, Rice says, “I’ve now been sober for eight years. I no longer smoke. I am now able to hold down a job. Still, my work here at the Sakura Café is all volunteer work. Though I’m at an age when others are retiring, it’s the last thing I want to do.”

He continued, “My weeks are filled with volunteer work. I remain active in AA – not just as a participant but also in AA service work as a sponsor of new members, as treasurer of one AA group and co-founder of another, called Anger to Serenity, which meets in Eastport. I continue to support the work of the Salvation Army, including service as a lay speaker in the Methodist Church, where I also played the piano for the church’s cherub (children’s) choir and taught senior high Sunday school with the pastor’s wife.”

Rice paused for a minute and then said, “My purpose today is to help people.”

Most important is project manager for Sakura Café. Rice does all projects, big and small. Everything from social media marketing and managing real estate – e.g., getting BGE gas lines connected to Sakura’s new Baltimore property – to delivering food, which amounts to 30-40 percent of Sakura’s business. And he does all this without pay while living on his Social Security check.

I said, “You have to run a pretty tight ship to live on Social Security, don’t you?”

He agreed but told me how he does it – including monthly financial support to his favorite charities: St. Jude’s Hospital for Children, SA, AA, Our Daily Bread devotional, and Helping Up Missions, which provides faith-based recovery services for men fighting addiction, poverty and homelessness in Greater Baltimore.

Somebody once said that the best way to overcome adversity is to seek out and build relationships with positive people. After talking with Steve Rice, I can see the truth in that perspective. I certainly departed from our conversation inspired and much happier – and only some of it was from the sushi and tea.