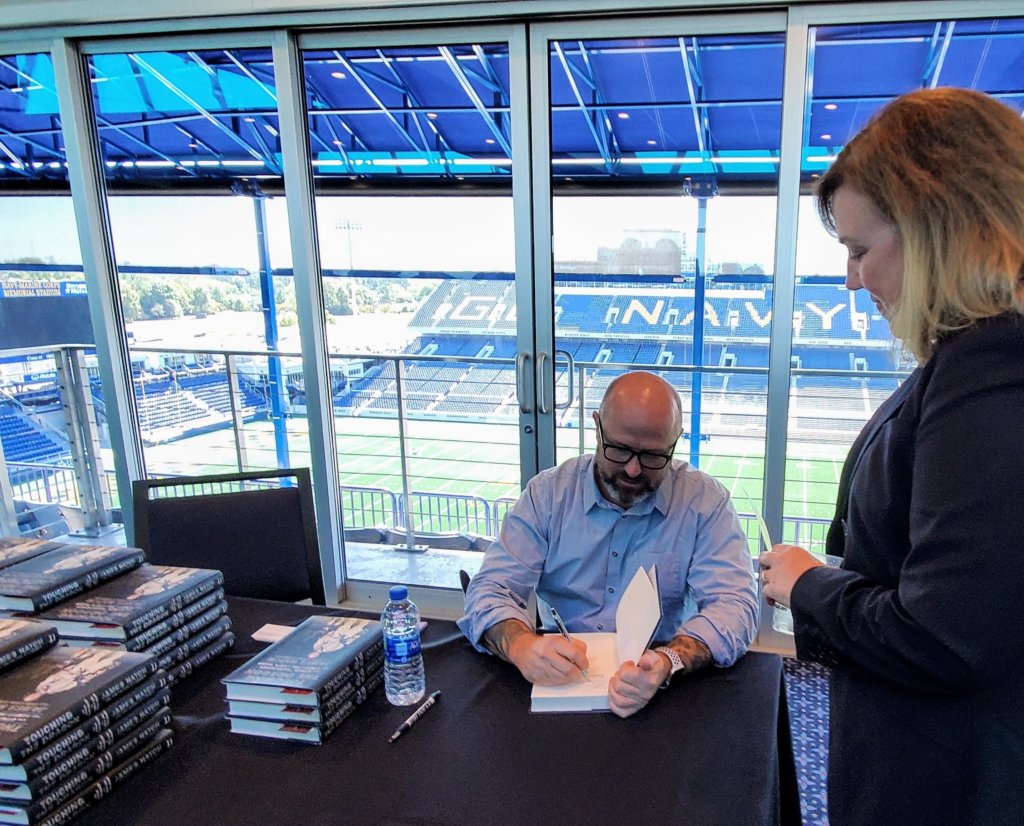 October 20, 2019/Phil Burgess/Comments Off on Meet a former Navy SEAL who’s a survivor at life’s wars

by Phil Burgess, Unabridged from the Life section of the Annapolis Capital, Sunday October 20, 2019

by Phil Burgess, Unabridged from the Life section of the Annapolis Capital, Sunday, October 20, 2019

Last week, I met a guy named James Hatch.  Hatch retired after 25 years and 11 months in the Navy, years he described as like riding on a Speeding Train.

James Hatch is also the name you’ll see on the cover of “Touching the Dragon and Other Techniques for Surviving Life’s Wars” – a book he authored in 2018 with Christian D’Andrea, a documentary filmmaker and writer.

But his friends call him Jimmy Hatch – Jimmy Hatch is a warrior, a retired Navy Senior Chief Petty Officer who also served as a Navy SEAL and a member of the Naval Special Warfare Development Group.

Jimmy the warrior, the special warfare operator, was also a master naval parachutist; a fighter in 150 missions in Iraq, Afghanistan, Bosnia and places in Africa; and an expert military dog trainer and handler whose SEAL dogs were partners and medal winners.

Hatch was in Annapolis to speak to a group assembled for a luncheon at the Navy-Marine Corps Memorial Stadium.

He arrived with Mina, a Belgian Malinois, an aggressive, smart, loyal and athletic working dog.  After lunch, he told stories from his life as a warrior, excerpted from “Touching the Dragon.”

“Curiously, the moments in my life where I’ve felt the most peace were in gunfights…[but] at home, those peaceful, clear moments were rare for me.  So, I retreated to war. To my crew.  To constant deployments.”

“I felt so at home in the one world and so much like an alien in the other, that I started to think that the civilian world back home would never understand me, and that it held nothing for me.”

But his comfort in the world of war was about to come to an end.  He told the story of his final mission in Afghanistan, when his team was sent to rescue a rogue American soldier, the infamous Sergeant Bowe Bergdahl, who had deserted his post on June 30, 2009, only to be captured and held for five years by Al-Qaida and Taliban militants.

It was during that time that Hatch and his team – including his military working dog named Remco – came under fire as they landed in an area near the Pakistan border where they had information on Bergdahl’s possible whereabouts.

Remco was leading them through a field when the dog located two enemy fighters.

“The fighters sprayed AK-47 bullets in our direction.  Remco was shot in the face, dead, and I stopped a bullet as it exploded through the femur above my right knee.”

“I screamed a lot.  It hurt really bad.  I thought I was going to die – and I would have if one of my team hadn’t quickly applied a tourniquet to my right leg – and if my dog had not warned us of the presence of the bad guys.”

Though Hatch survived, it was a career-ending injury which required 18 surgeries to save his leg.

His injury was also the beginning of a difficult transition, especially psychologically. “Stepping out of the Speeding Train caused me to lose my mind.  I was almost always an asset.  Now I was a liability.  I lost my sense of purpose.”  So, what do you do when you are suddenly divorced from your calling?

But he found a new life on the other side of darkness.

“I was saved by a chain that started with my friends in the firefight who risked their lives to save me on the battlefield and runs all the way through the field hospital doctors, stateside surgeons, volunteers, fellow veterans, psychologists and family that are still there for me today.”

Through his storytelling, Hatch shared insights from his life on the Speeding Train:

According to Hatch, “Dogs saved me.  My mission now is to take care of them.”  Though Spikes K9 Fund is not yet five years old, it has already helped more than 900 working dogs.  According to Hatch, “Our goal is to help 1,000 dogs by the end of the year.”

Hatch is among those who had a forced retirement, though his was caused by a Taliban bullet.  Still, he carved a new life that is both productive and satisfying by building on the knowledge, skills and passions of his old life.  If work is love made visible, then so is a dog’s ballistic vest.