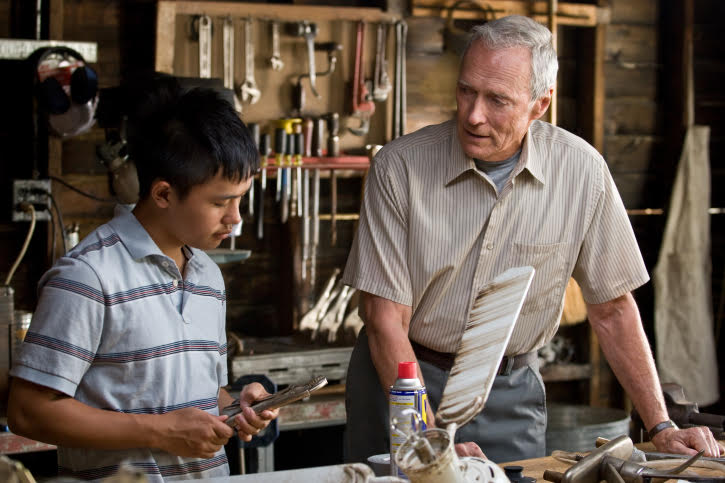 Wisdom that comes with aging must be shared and replenished

by Phil Burgess, Unabridged from the Life section of the Annapolis Capital, Sunday October 6, 2019

Over the past decade, Clint Eastwood has presented a provocative profile for aging – both in his personal life and through recent characters he has played in acclaimed films that depict an aging man adapting to a changing culture.

In “Gran Torino” (2008), Eastwood plays a petulant old man and a disgruntled Korean War vet who sets out to reform his much younger and disrespectful neighbor, a Hmong teenager, who tries to steal his prized 1972 Ford Gran Torino.

In “The Mule” (2018), Eastwood plays a mild-mannered, hardworking 90-year-old owner of a nursery that specializes in daylilies but is driven out of business by internet flowers, so he turns drug mule for the Mexican cartels with a low-key but highly effective drug-hauling operation.

In both films, the aging Eastwood strives to adapt to new circumstances – and does.  He also reflects a lot on the choices he faces, lamenting that things aren’t like they used to be.

This fits an often-heard narrative that goes like this: “Those old folks, they are always living in the past.”  But I say it’s the knowledge of the consequences of past actions and our ability to share with the next generation that adds texture, meaning and understanding to the events of the day – a theme in “The Mule”.

I came to this truth some years ago when entering the library at the University of Colorado where, above the entrance, are inscribed words from an early university president, George Norlin: “Who knows only his own generation remains always a child”.  This truth is now etched as clearly in my mind as it’s etched in the stone of that library portal.

Norlin, a one-time professor of the classics also acknowledged his paraphrase from the writings of Cicero, who said, “To be ignorant of what occurred before you were born is to remain always a child. For what is the worth of human life, unless it be woven into the life of our ancestors by the records of history?”

Along those lines, Norlin also opined that it’s “…through companionship that ranges beyond his day and time…” that a person is able to grow in the full stature of his being.

Another objection to luminaries goes something like this: “Those old folks, they think they know everything.”  But I say it’s not that we know everything; it’s just that we know a lot more than many of the younger folk we deal with every day – an important theme in “Gran Torino”.

Our biggest problem is holding our tongue, especially when we see younger offspring making unwise decisions – i.e., decisions uninformed by prudence, a virtue that takes into account all the things that can impinge on a decision to buy that house or that car or to delay going for additional education or training.

Or seeing younger people in the workplace who lack a proper work ethic or who become unhinged with a colleague or supervisor and then wonder why things aren’t working out.

At the personal level we often hold our tongues because we respect the autonomy of younger decision-makers, or because we firmly believe that most people will best learn by doing.  So, we let them learn via the College of Hard Knocks, despite the costs.

Some companies – e.g., from McDonalds to apprentice programs in the crafts – institutionalize the passing down of knowledge, attitudes and skills of those in later life by hiring or retaining older workers to help socialize younger workers to the culture of the world of work.  The result is higher productivity for the company, increased customer satisfaction, and higher wages for the younger men and women who are being mentored in the crafts and professions.

But we also need to look in the mirror.  Just because we are passing through our bonus years doesn’t mean we should quit learning or wanting to improve ourselves.

Irish poet and Nobel Laureate, William Butler Yates, reminded us years ago that “Education is not the filling of a pail, but the lighting of a fire.”

If that fire is not fed, it will fade away.  Another example of “use it or lose it”.

In my interviews of nearly 1,000 people in their bonus years, I’ve found that the two most valued institutions outside the family in our culture are the public library and community college, strong indicators that opportunities for continuing education are central to positive aging for those in their bonus years.

And it’s not just book learning.  Renaissance essayist and storyteller Michel de Montaigne said of Socrates, “There is nothing more notable…than he found time, when he was an old man, to learn music and dancing, and thought it time well spent.”

Continuous improvement through continuous learning – whether it’s via books, hands-on work or acquiring new skills such as dancing or music – is what positive aging calls us to do with our gifts and our lives as long as we’re able.

As we become differently abled owing to disease, decline or disability, positive aging calls us to adapt, which is what we do with the aid of everything from joint replacements and physical therapy to walkers and audio books.

When all is said and done, we will finish well when we use our gifts to the fullest.  For the luckiest among us, it will include passing our wisdom to the next generation and improving on some of the choices of Clint Eastwood in “Gran Torino” and “The Mule”.